MOSQUES WERE SET ON FIRE BY LIGHTING

Momcilo Krajisnik's defense witness testifies about events in Srbac, claiming he doesn't know if the mosques in the village of Kobas were set on fire by an unidentified perpetrator, as the official record stands, or by lighting 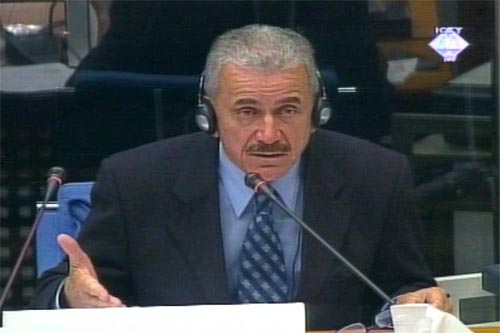 Milos Milincic, defense witness for Krajisnik
The mosque in Bosanski Kobas, a village in the Srbac municipality, was set on fire in July 1993. Milos Milincic, testifying as Momcilo Krajisnik's defense witness, claims he doesn’t know who did it – Serbs, Muslims or lighting. During the war, Milincic was the president of the Srbac municipality. He claims he did everything in his power to identify the perpetrators. Yet the official records show to this day that the crime was committed by an unidentified perpetrator.

Explaining the speculations arising from the incident in which the mosque was burned to the Chamber, Milincic said there had been a bad storm that night. The rumor had it the mosque had been set on fire by lighting. He added that the police officer on duty that night in Kobas had noted that before the fire he "noticed flickering in the direction of the mosque". The second speculation was that the Serbs were to blame for the fire, the witness said, and the third that the mosque was destroyed by Muslims themselves to conceal the ethnicity of the village residents in fear of the Serb refugees passing through the area.

Milincic presents his municipality as one of the few positive examples in the war. He says the atmosphere in Srbac was tolerant, mostly non-violent and that those who committed crimes were punished. As proof of inter-ethnic trust, he notes that there were 80 Muslims and about 50 other non-Serbs in the Srbac Battalion. He admits they were all mobilized and that they would have faced criminal charges had they tried to dodge the draft.

About 90 percent of the pre-war population in Srbac were Serbs, with less than five percent Muslims. The crimes committed in the territory of this municipality are not alleged in the indictment against Krajisnik. From the list of more than 30 municipalities in BH in the indictment, the defense has so far dealt only with the events in Foca.

Milincic will be answering questions from the prosecution as his testimony continues.