WHO DID THE SDS ARM AND WHY?

Momcilo Krajisnik's defense witness discussed the "political role" of the Serbian Democratic Party in the distribution of weapons and claimed that weapons were distributed both to Serbs and Muslims in Prnjavor, but he was unable to say how it was possible for the weapons to be distributed to Muslims if, as he said, the goal of the SDS was to "prevent the Muslim genocide against Serbs" 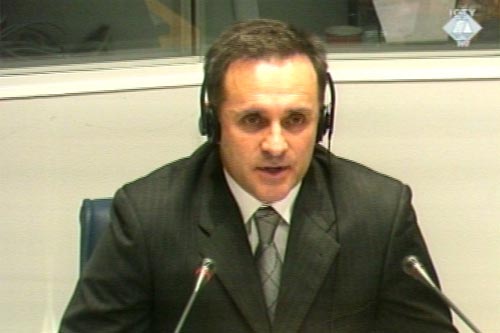 Nemanja Vasic, defense witness for Krajisnik
Veljko Milankovic, the commander of the Wolves of Vucjak, was both "a hero" and "a criminal"; "the people adored him…but feared him" at the same time; "he and his unit were important for Prnjavor", but also "an obstacle to the functioning of the authorities in the town".

Nemanja Vasic, testifying as Momcilo Krajisnik's defense witness, made all those claims about the Wolves of Vucjak and their commander, Veljko Milankovic. The Wolves did create problems in the town, but Vasic claims they were feared by Serbs and Muslims alike. "You know, I didn't feel at all comfortable when I saw ten drunken and armed men walking down the street," the witness clarified. He said that their reign of terror in the town was not the cause for the departure of the Muslim population.

The witness denies that the unit was controlled by the civilian authorities. He does allow the possibility that the Wolves were under the command of the Territorial Defense for a period, noting that the TO was subordinate to the army and late general Talic. When the prosecutor showed him a document in which the Prnjavor Crisis Staff orders the TO commander to cut down on fuel consumption, the witness stated that "this order was issued exceptionally on that occasion, because the Crisis Staff supplied the petrol".

In order to show that the Wolves had the support of the accused, prosecutor Alan Tieger read part of Krajisnik's speech from July 1996, on the fifth anniversary of the unit. "Your acts are immortal, you are the heroes of the Third Serbian Uprising, you belong to the entire Serbian people. We have always been wolves and we will always be wolves for all those who want to take Republika Srpska away from us," Krajisnik said on that occasion. Vasic then said it was an "inflammatory electioneering speech".

When the prosecutor first asked about the arming of the Serb population by the SDS, Vasic categorically claims the party had not been involved in those things. Then the prosecutor read out an excerpt from Vasic's speech from September 1993, praising the SDS for "playing a crucial role in preventing the genocide against Serbs, because it had armed the Serb people on time". Vasic now claims that what he meant was that "the SDS played an important political role in distributing weapons to the Serbs because it made the JNA do it". The witness also claims that in 1991 the Territorial Defense weapons were distributed to Serbs and Muslims alike in Prnjavor, because of an imminent threat of war. He failed to provide a full answer to the question asked by the presiding judge how it was possible for the weapons to be distributed to Muslims too, if the goal of the SDS was "to prevent the Muslims from committing genocide against Serbs".

As the cross-examination drew to a close today, Vasic confirmed to the prosecutor that he was to this day "a faithful follower of the SDS policy and Radovan Karadzic". He also confirmed that he had been removed from the post of the head of the Roads Directorate in Republika Srpska by a decision of the High Representative for BH, because he had been obstructing the cooperation of the Banja Luka authorities with the International Criminal Tribunal for the former Yugoslavia.