SHIFTING THE BLAME TO A DEAD GENERAL

Momcilo Krajisnik's defense witness claims that the "Wolves of Vucjak", who terrorized the non-Serb population in Prnjavor in 1992, as alleged in the indictment, were in fact under the command of the late General Talic and that the civilian authorities had no control over them 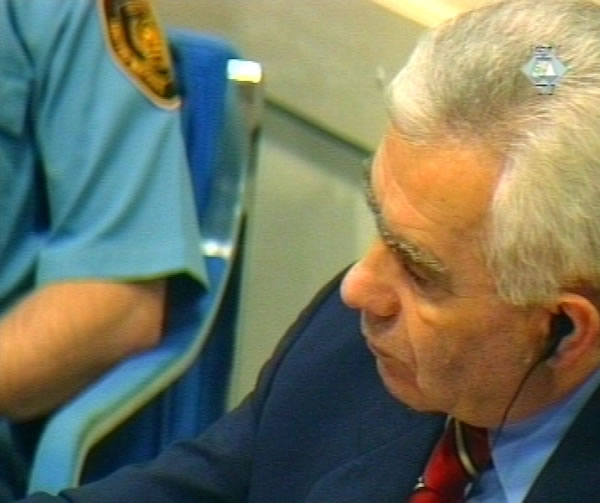 Momcilo Krajisnik in the courtroom
The "Wolves of Vucjak" were under the command of General Talic and the civilian authorities had no control over them, claims Momcilo Krajisnik's defense witness. He is Nemanja Vasic, former president of the municipality and the crisis staff in Prnjavor. Several prosecution witnesses testified that the members of that unit had terrorized the non-Serb population in Prnjavor in 1992. The defense tried to show today that they were not controlled by the civilian authorities.

The witness described the members of the unit as "brave lads", most of them "very young", who were used to "break through the front lines" and who never spent a long time there. After the end of their missions, they would return to Prnjavor. "They were disciplined soldiers, but they did cause minor problems while they were in Prnjavor, because they interfered in the affairs of the civilian authorities." Because of the minor problems, the authorities in Prnjavor asked Radovan Karadzic to prohibit the Wolves from carrying arms during their stays in Prnjavor, Vasic explained. However, "General Talic rejected this". The witness admitted that it was "normal that in such an atmosphere the non-Serbs felt more threatened than Serbs".

Nemanja Vasic denies that the non-Serbs in Prnjavor were discriminated against, showing documents in which the bishop of Banja Luka and representatives of a Muslim humanitarian organization commend the conduct of the municipal authorities. Despite all this, the ethnic make-up of the Prnjavor municipality changed in 1992 and about 1,500 Muslims remained of the pre-war Muslim population of 7,000. He said that most of them "had left in 1991 because of the fear of war; they went to Austria and Germany to stay with their relatives working there." Krajisnik's defense counsel asked the witness to comment on the claim made by prosecution witness Jasmin Odobasic that "Vasic personally ordered [the witness] to be beaten". "This is untrue. I never ordered anyone to be beaten in Prnjavor," Vasic said.

The indictment charges Krajisnik with the destruction of places of worship and cultural heritage. The witness said the mosques in the villages of Lisnja and Puraca had been burned "in the fighting with the Muslim extremists who refused to surrender their weapons", and that he had called the soldiers in a nearby shop to take fire extinguishers and try to put the fire in one of the mosques out. "They came back saying that the wooden minaret had caught fire and that there was nothing they could do," the witness explained the reason why the fire-fighting operation was unsuccessful.

Although he joined the SDS as soon as it was founded, Vasic claims that he has never seen the document entitled "Instruction on the organization and operation of the organs of the Serb people in Bosnia and Herzegovina in emergencies", adopted on 19 December 1991. He also says that the expression "six strategic goals" is unknown to him and that he has no knowledge of what the goals meant. Vasic also maintains that the operation of the SDS was put on hold in the spring of 1992 and that the party did not function at all until just before the end of the war. "As President Karadzic explained to us, the operation of the party was put on hold because of the need for the Serb people to be united and the fact that it was impossible for the members of party organs to meet."

The witness was a member of the Serbian Democratic Party in BH until June 2004 when the High Representative for BH banned him from public office because of his contribution to "creating the climate of non-compliance with international law," or non-cooperation with the International Criminal Tribunal for the former Yugoslavia.

Tomorrow, Nemanja Vasic will be answering the questions by the prosecution.