SESELJ: TUDJMAN WAS NOT A SERB! 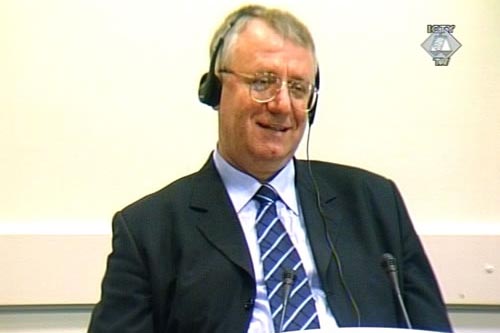 Vojislav Seselj in the courtroom
Vukovar “has always been a Serb town,” Seselj claimed today as his testimony at the trial of Slobodan Milosevic continued. He did admit that the number of Serbs and Croats living in the town on the eve of war was more or less the same, but went on to explain that those were “false Croats”, or rather, “Catholic Serbs, misled by the Catholic Church into thinking they were Croats.”

This explanation prompted Scottish judge Bonomy to ask the witness whether the late Croatian president Tudjman had in fact been “a Serb who mistakenly thought he was a Croat.”

"No," Seselj replied, adding that Tudjman, “as his name indicates was a foreign man, a German, in fact.”

In his cross-examination today, the prosecutor showed some video clips made in Vukovar in 1991, including the footage of Chetniks carrying a black flag singing, “Slobo, send us salad, there will be meat, we’ll be slaughtering Croats.” Seselj could not say who the Slobo in the song was. He explained the black flag as “partly Chetnik”, denied that those had been the volunteers from the Serbian Radical Party (SRS). As for the soldiers seen in the footage, he said they “were probably part of the JNA.” The song about “salad and meat”, he clarified, “was composed by the social underclass, on football stadiums in the late 80’s, it was not sung by SRS members.” Seselj also noted that “the singing may have been done on order, for the purpose of filming it.” According to him it would not be the first such incident.

The second clip from Vukovar shows a group of Chetniks, carrying the same flag, drinking and singing to celebrate the “liberation of Vukovar”. One of them explains to the reporter that the war would be over once they “reach the Karlobag-Ogulin-Karlovac-Virovitica border” and when the “Croats are cleansed.” Milosevic was the first to react to the tape, expressing his astonishment at the fact that a “Serbian Chetnik is speaking English”. He also claimed that the tape shows the same Chetniks “flying a Croatian flag, with the checkerboard emblem.” Judge Kwon corrected him, noting that the “flag was not being flown, but set on fire.” Seselj, for his part, said it was possible that this “unknown soldier may have made the statement on the orders of the reporter,” and not because he had been inspired by Seselj’s ideology of Greater Serbia.

From Vukovar the prosecutor moved on to Kosovo, quoting first from the platform of the SRS, which calls for the expulsion of 360,000 Albanian emigrants and their offspring. As he clarified the points made in the declaration, Seselj said that they would have been expelled “in the same way in which England, Germany or France expel their illegal immigrants,” always “in accordance with the law and with recourse to legal remedies.” The prosecutor then quoted from a speech Seselj had made in 1990. This, he said, will be done “very easily: they will be surrounded by the troops and pushed back into Albania.” Seselj admitted that this “statement he made once was not in accordance with the SRS policy.” Judge Bonomy failed to see any contradiction between the two quotes. “One is a political goal and the other is the method that would be used to achieve it.”

As today’s cross-examination drew to a close, the prosecutor mentioned the most recent motion made by Seselj, challenging the authenticity of the video tape showing the Scorpions kill Bosniak youths in Srebrenica. This will apparently be discussed as the cross-examination of Slobodan Milosevic’s witness continues tomorrow.