As his cross-examination continues, Vojislav Seselj labels all his old statements read out to him by the prosecutor as “exagerated”, “fabrications”, “patently false”, designed to “provoke” or “make people laugh” 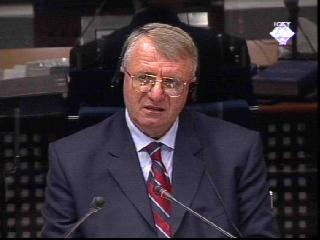 Vojislav Seselj testifying in defense of Slobodan Milosevic
After he described Seselj as a “dangerous, evil man and a liar”, prosecutor Geoffrey Nice put several other claims to him today. He said that Milosevic used him “to carry out his dirty jobs” and that he was a “lethal weapon” allowed by the regime to “incite violence with hate speech” because it was “in the interests of the accused” at the time.

Vojislav Seselj denied all the claims made by the prosecutor. He said he had “never done any dirty jobs for Milosevic but was merely presenting the truth, historical and current” and that he had never “incited to crimes.” He also claims that the prosecutor has no evidence to corroborate his allegations.

The prosecutor contends, however, that the evidence of the role that Seselj played are contained in his collected works, in several dozen books that contain everything the leader of the Serbian Radicals has said in his public appearances in the last ten years. Seselj, who has given his collected works to the prosecution himself, insists that everything that is printed there must be read and interpreted “in the context” of Serb political scene and political tradition and the “fierce propaganda war” he and his party waged against Milosevic’s regime in some periods.

He claims that, when interpreted in that “context”, all of the statements are “exagerated”, “fabrications”, “patently false”, made to “provoke” or “make people laugh.” When for instance he spoke some ten years ago about the credit Milosevic had to be given for his role in the arming of the volunteers of the Serbian Radical Party (SRS), Seselj says that he “gave credit” to the former Serbian president “for all those things that the federal government and the JNA were doing – and he had no control over them.” Praise for Milosevic for helping the Serbs across the Drina river were, as Seselj says today, “a personification by which Milosevic was given credit for the actions of all the Serbian and FRY authorities.”

The judges could not understand how such “personifications” and giving credit to Milosevic could harm the accused at the time, but Seselj insisted that he was doing that to impeach the then Serbian president because of his “overly constructive attitude towards the international community.”

Seselj now claims that all his statements about the ties between SRS volunteers and the Serbian state security service, Red Berets, Franko Simatovic and others served the same end – to impeach Milosevic. Those statements were also “exagerated”, “fabrications” or “false”, because the SRS volunteers were controlled by the JNA and not by the police which he said was not active on the other bank of the Drina and Danube rivers. The exception is the involvement of individuals such as Simatovic or Badza who were there as volunteers.

The prosecutor quoted from a speech in which Seselj says that the public was not aware that the SRS volunteers had fought across the Drina and Danube rivers, side by side with the special police units,” and in which he showed a “Letter of Appreciation” given to Chetnik leader Vakic for his valiant efforts in the fighting in Skelani by Franko Simatovic. The court was shown a copy of the Letter of Appreciation – published in the SRS weekly Velika Srbija – but Seselj now claims it is a forgery done by “someone from the party”, again to discredit Milosevic – that despite the fact that he is not mentioned anywhere at all.

Seselj’s admission that he “exagerated, fabricated and lied” in the context of Serbian political tradition and propaganda war could, as Judge Robinson noted, cast “a shadow on his testimony up to now”. Seselj is unconcerned because, as he said, he “counts on being tried by history”, not by the ICTY judges.