PROSECUTOR: SESELJ IS “DANGEROUS, EVIL AND A LIAR”

In the cross-examination, prosecutor Geoffrey Nice claims that Vojislav Seselj “is a dangerous and evil man who generated fear and created the necessary conditions for violence,” adding that in his testimony Seselj was “lying in order to cover up the role played by the accused Milosevic in organizing and sending the paramilitary formations to Croatia and Bosnia,” and the role of the Serbian State Security Service in the secret wars outside Serbia. Seselj responds applying the “retorsion principle” 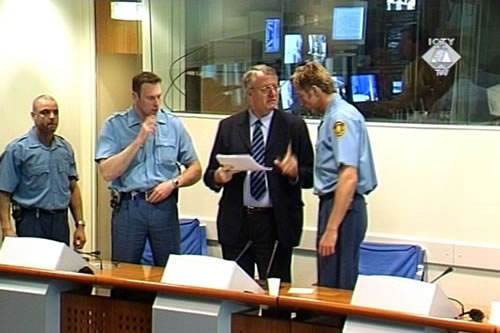 Vojislav Seselj standing in the courtroom
In the cross-examination of Vojislav Seselj today, the prosecutor tried to corroborate the argument in the indictment that Slobodan Milosevic and the other participants in the joint criminal enterprise “spread exaggerated and false messages about ethnically-motivated attacks on the Serb people in order to create an atmosphere of fear and hatred among Serbs”. To that end, prosecutor Geoffrey Nice quoted statements and speeches made by Vojislav Seselj in the early nineties, in which he spoke about the attacks by “the Ustasha hordes on the Serb villages, women and children” and the plans by “pan-Islamic fundamentalists” to commit another genocide. The prosecutor also quoted Seselj’s threats from that period to the effect that Serbs would “take their revenge on their Muslim enemies,” while Croats “will receive their bill for the victims in the 1st and 2nd World Wars,” and that “revenge will be taken upon them there where they are the weakest.”

After he reminded Seselj about his statements in the early nineties, Nice put it to Seselj that he was a “dangerous and evil man who generated fear among the Serbs and created the necessary conditions for violence.” Seselj went one better and told Nice he was a “devious man, the most depraved person at the Tribunal.” Judge Robinson intervened then to explain to the witness – who claims he is a Law School professor – that “there is nothing personal or bad” in what the prosecutor told him, but that those were merely the arguments the prosecution was legitimately putting in the cross-examination of a defense witness.

Seselj, however, would not budge, and repeated that Nice was “wicked, devious and evil”. When the judge repeated the prosecutor’s question, Seselj added that “everyone who says [Seselj is] dangerous and evil is himself evil, depraved and devious”. The judge then switched Seselj’s microphone off, warned him he was not helping Milosevic and asked the prosecutor to move on to another topic.

The new topic were Seselj’s statements made in March 1995 in a long interview he gave to a British TV crew that was shooting the material for the Death of Yugoslavia, a TV series. The prosecutor managed to get hold of the entire interview, as only excerpts were used in the series. The prosecutor proceeded to show four segments in which Seselj speaks about the volunteers of the Serbian Radical Party (SRS), about how they were ‘armed by Milosevic’s police”, that everything was “done with Milosevic’s knowledge” and with the assistance of the “key people in the police”, that the “operation in Zvornik was planned in Belgrade” and that the main role there was played by the “Red Berets, special units of the Serbian State Security Service”, who had under their command the SRS volunteers, Arkan’s Tigers and Zuca’s formation, while the JNA “mostly provided artillery support.”

Seselj now claims he was not telling the truth in the interview, or at least not the whole truth. He said he put in Milosevic and the Serbian State Security service “for reasons of political propaganda, to rile them”. He says he wanted to “ruin Milosevic’s peaceful policy” and his new image of a “peacemaker” in the West. He wanted to take his revenge on the State Security Service because it was trying to break up the SRS and went as far as to “say he was a Croat”, which “hurt the most”, as he admits.

Seselj was in trouble when he had to explain his clairvoyance: in March 1995 he said that Frenki Simatovic was the commander of the Red Berets, yet now he claims that the Red Berets, under the command of Simatovic, were not established before May 1996. Simatovic himself, in a video clip that was shown to Seselj, dating from May 1996, speaks about the glorious path of the unit from the day of its establishment, 4 May 1991 until its fifth anniversary, attended by the then president of Serbia, Slobodan Milosevic.

The prosecutor did not accept Seselj’s explanations that “there were various units wearing red headgear which were called the Red Berets” and accused Seselj of deliberately lying and trying to mislead the court in an attempt to cover up the role Slobodan Milosevic played in organizing and sending paramilitary formations to Croatia and Bosnia and the role the Serbian State Security Service and its special units played in the secret wars outside of the Serbian territory. Seselj countered those claims applying his “retorsion principle”, accusing the prosecutor of lying and claiming he had caught him in the lie” yesterday and today”, forcing Judge Robinson to switch off his microphone again and to instruct him about rules of proper conduct in courtroom.