JUDGES GET TO KNOW "THE REAL SESELJ" 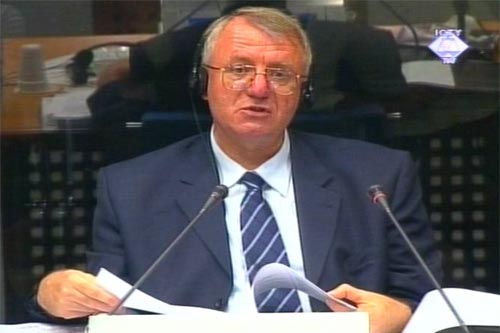 Vojislav Seselj testifying in defense of Slobodan Milosevic
In the eight days of his direct examination of Vojislav Seselj, Slobodan Milosevic tried hard to present his witness as an eminent scholar and politician with whom he had had disagreements on certain issues and who had his fixations about Greater Serbia, but who always advocated political solutions based on the Constitution and law, and was always against violence and crime.

During those eight days, Seselj showed unprecedented respect for the judges and the courtroom procedure, he took the oath, stood up when the judges entered and exited, complied with their orders and even exchanged a few compliments with Judge Robinson. At times, Seselj appeared more polite than Milosevic himself, as the latter allowed himself to vent his anger at the prosecutor on several occasions.

Then the judges got their opportunity to meet "the real Seselj". Prosecutor Nice opted to use Seselj's views of the Tribunal to begin the procedure. The witness repeated them in front of the judges with pleasure. The Tribunal, he said, was "not a judicial but a political and anti-Serb institution", established to act "against the interests of the Serbian people," "compromised by the sources of its funding, which include Soros." Without any qualms, Seselj read out parts of his articles and briefs in which he deals with some of the figures from the ICTY, not leaving out the vulgar language and profanities. Leaving out the obscenities, President Meron is described in those publications as "a genocidal Israeli diplomat," Chief Prosecutor Carla del Ponte is "a prostitute in the legal sense", the Registrar is a "criminal", and the Dutch lawyer assigned to Seselj as a stand-by defense counsel is a "scoundrel."

Furthermore, the vast majority of the Serbs who have been or are being tried before the ICTY are "wrongly convicted or innocent while awaiting trial" according to Seselj, because the prosecution "makes deals with the real criminals", forcing them to "testify against the innocent." For Seselj, the "real criminals" are all those Serbs who have pleaded guilty and testified or will testify against Milosevic, such as Miroslav Deronjic, Milan Babic, Darko Mrdja and others. The late Pope John Paul II was mentioned in the part of the cross-examination devoted to Seselj's views of the Tribunal. According to Seselj, he is "responsible for all the crimes [Seselj] has been charged with", which will be the "main argument" of his defense.

Although Seselj has learned over the past few days, while answering Milosevic's questions, to control the volume of his voice and the speed of his speech, Judge Robinson was forced to warn the witness several times during the cross-examination "not to shout".

As for the Milosevic case, the prosecutor could probably have completed his cross-examination there and leave it to the judges to decide how much weight to give to the testimony of a witness who has such views and uses such language. But, as Seselj himself is charged with the crimes against humanity in Croatia, Bosnia and Herzegovina and Vojvodina, the prosecution apparently did not want to miss the opportunity to cross-examine him not so much as Milosevic's defense witness but as an accused before his trial has even begun.

This part of the cross-examination started with the prosecutor quoting Seselj's statements from 1990 and 1991, in which he announces that "Croatia will be amputated" and that it "will be punished by loss of territory" because the "Croatian people as a whole is Ustasha", with rare exceptions. Seselj's threats to the "Muslim fundamentalists", dating from the same period, were also quoted. There he said that "if a large part of the Muslims again become an instrument in the hands of Croats, the Serb vengeance will be terrible," and they – the "fundamentalists" or "a large part of the Muslims" – "will not stop before they reach Anatolia."