Nesib Buric quotes from Ivo Andric's Travnik Chronicle to contest the allegations made in the «Srebrenica chronicles» from 1992 and 1993. One of them was written by the accused Naser Oric, the prosecution alleges 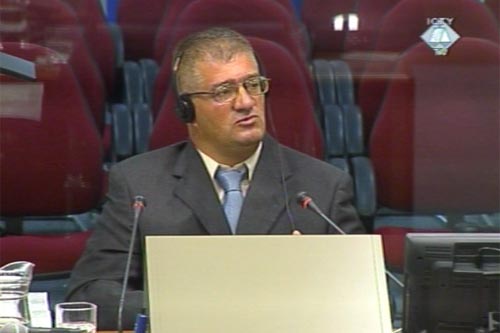 Nesib Buric, defense witness for Naser Oric
"Naser Oric was not, nor could he have been the commander of all the units in the municipality of Srebrenica,” said defense witness Nesib Buric as his cross-examination drew to a close.

Buric allows that Oric may have “led the group from Potocari,” but insists that the “groups of armed lads” set up to defend the villages could not be called military units. He denied strenuously that there has been any rigid military structure in Srebrenica in 1992 and 1993. “I maintain that the territorial defense is a fabrication,” Buric said, confronted with a document prosecutor Gramsci Difazio claims is a list of Territorial Defense members in the Osmaca area.

The witness labeled the list a “population census”, although the prosecutor noted that it contained “only the male population aged between 16 and 70.” Buric maintained that “until the demilitarization there were no units in Srebrenica” that were part of the BH Army. According to him those were just “organized groups”.

Buric himself led one such group, in the village of Osmaca, in the period relevant for the indictment. The achievements of his group and other “organized groups” in the Srebrenica area between May 1992 and March 1993 have been described in two books. The prosecution claims that the authors are Nijaz Masic, a history teacher from Srebrenica, and the accused Naser Oric. The prosecution has exhibited both books. The defense has challenged their accuracy and the claim that Oric wrote the book Srebrenica testifies and accuses.

As Buric suggested, the real author is Nijaz Masic, who wrote the other book, Aggression, Resistance, Treason, Genocide. Although the witness admits he has not “seen, let alone read” any of the books, he considers both of them to be inaccurate and unreliable. As he said, “Masic is an historian, and historians are known to lie a lot.”

When the prosecutor asked him to explain how his name got on the list Masic thanked for helping him write the book, Buric said that this was probably due to his post-war job as the education, science and sports officer in the Srebrenica municipality.

Buric adds that Masic never asked him for any information he printed in the book. Even if he had, He “would not have given him any.” He personally “would not allow [Nijaz Masic] to write at all.”

Masic explained the reasons for his attitude towards Masic in closed session, after the judge allowed him to do so. The only thing available to the general public is the quote the witness used to describe his views of the “Srebrenica Chronicles.”

"The one who can’t read is not stupid, but the one who believes everything that has been written,” Buric said, quoting Ivo Andric’s Travnik Chronicle.