EVERYONE WAS A LEADER, NO ONE WAS A COMMANDER

Naser Oric’s defense witness claims that the accused merely “led” his group of fighters, not “commanded” them 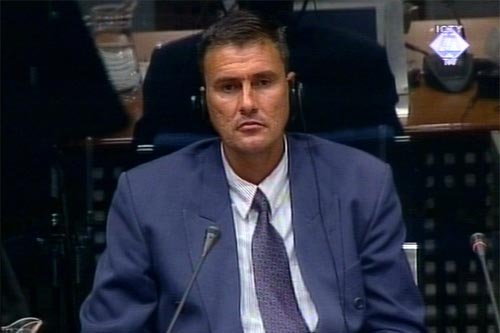 Hazim Malagic, defense witness for Oric
“The BH Army formations in Srebrenica in 1992 and 1993 were just poorly-armed groups with no chain of command,” Hazim Malagic said today, testifying as Naser Oric’s defense witness. Malagic said that after the prosecutor showed him a video tape from April 1994, where Oric is presented as the commander of the 8th Operational Group of the BH Army, and where he himself speaks about the second anniversary of the establishment of the Territorial Defense in Srebrenica.

After yet another tape was shown, in which Oric recounts an incident in the war and said that a soldier called him commander, Malagic maintained that it was wrong to use the term “commander” and that the term “leader” would be more appropriate. “Oric led the group in Potocari, just as Osman Malagic was the leader of my group from Likari, and Semso Husic in Poloznik,” the witness explained, stressing that the term “commander” was used for battalions and larger military formations.

The witness said his group had had a radio used to intercept the communications by Serb forces around Srebrenica. He added that only his group had access to this information. The prosecutor asked him today to clarify this statement, noting that on several occasions, Malagic himself said the information had been relayed to other places. A tape was shown in which Oric says he was notified about the preparations of the Serb forces by courier. Malagic said the information “could have been relayed by civilians who were on the move all the time, as they foraged for food,” or could even have been exchanged by soldiers from different groups if they met by chance, but that “there was no courier system”.

Malagic again denied the credibility of the documents the prosecution has. His comment on a document describing BH Army units’ plans to reconnoiter the terrain was that this would have been as if he had been sent by someone to reconnoiter The Hague.” “You are a beautiful and charming lady and I’m sorry I have to say this, but you must see yourself the contradictions in those documents,” Malagic said, addressing prosecutor Sellers.

As the session drew to a close, Simon Mardel took the stand as the next witness. He is an English doctor who came to Srebrenica with General Morillon and a group of UNPROFOR soldiers.