Judge Orie confirms contempt of court indictments for two Croatian newspaper editors, Josip Jovic of Slobodna Dalmacija and Marijan Krizic of Hrvatsko slovo. They have been charged for making public the identity of a protected witness who testified at the trial of Tihomir Blaskic 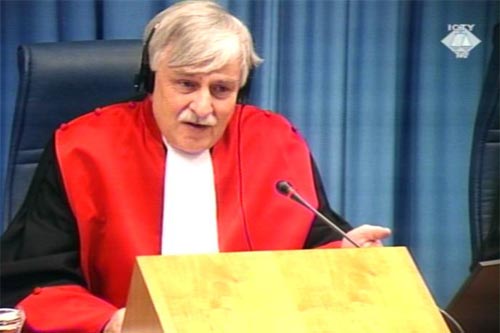 Alphons Orie, judge in the Tribunal
Croatian journalists Josip Jovic and Marijan Krizic have been charged with contempt of court for publishing the identity and parts of the testimony of a protected witness who testified at the trial of Tihomir Blaskic, it has been confirmed today at the Tribunal. Their initial appearance before a judge has been scheduled for 26 September.

Judge Alphons Orie confirmed on 9 September the indictments against Jovic, former editor-in-chief of the daily Slobodna Dalmacija and against Krizic, former editor-in-chief of the weekly Hrvatsko slovo. The identity and parts of the testimony of a protected witness and the fact that the testimony was given in closed session were published in Slobodna Dalmacija in December 2000. This, as the indictment alleges, constituted a “direct violation” of an ICTY order for the protection of the witness. The indictment further alleges that a Trial Chamber of the Tribunal ordered Slobodna Dalmacija and the weekly Globus to cease “the violation of protective measures granted to this witness”. Slobodna Dalmacija published the order two days later, under a headline that again revealed the identity of the protected witness. A comment was published accusing the Tribunal of launching “an aggression against the rule of law.”

The identity and parts of the testimony of the same protected witness, as well as the fact that he had testified in closed session, were published in Hrvatsko slovo too, in November and December 2004. When the duty judge of the Tribunal issued an order to cease immediately with the violation of the protective measures, Hrvatsko slovo, in its 10 December issue, published side by side the order of the Tribunal and the article in which it yet again revealed the identity of the protected witness. Seven days later, another article was published in Hrvatsko slovo, revealing the identity of the same witness.

These are the third and the fourth contempt of court indictments issued because of the publication of the identity of protected witnesses in the Blaskic case. The previous two indictments charged Markica Rebic, former head of the intelligence service, and three journalists and editors, Ivica Marijacic, Stjepan Seselj and Domagoj Margetic. They all pleaded not guilty in June 2005.