DEFENCE CHALLENGES THE IDENTIFICATION OF THE ACCUSED

Through the report and testimony of the Dutch identification expert, the defense of the former KLA members tries to challenge the validity of the identification of the three accused by former detainees in the Lapusnik camp 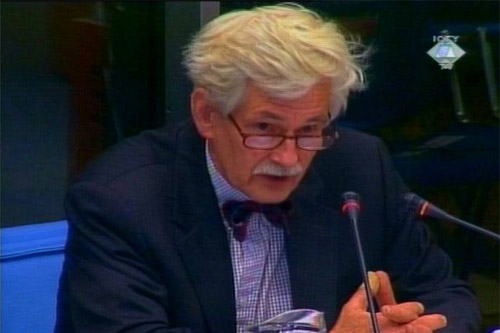 William Albert Wagenaar, witness for the defense in the 'Kosovo three' trial
The testimony of William Albert Wagenaar, Dutch professor of social psychology, concluded the defense case at the trial of Fatmir Limaj, Isak Musliu and Haradin Bala, former KLA members accused of the crimes in the Lapusnik camp in the summer of 1998. Professor Wagenaar filed his expert report which the defense is using to challenge the validity of the identification of the accused in this case. Although he was presented as a joint defense witness, he was questioned only by Michael Topolski, Isak Musliu's defense counsel.

Professor Wagenaar was in fact the only defense witness called by Musliu. His lawyer claims that the prosecution has failed to prove the responsibility of his client and that his being in the dock is the result of mistaken identity. Topolski questioned the Dutch professor only about the first part of his expert report which pertains to the rules that must be followed in order to prevent misidentification. For instance, persons whose photographs are used in photo spreads must resemble the suspect as closely as possible, the person conducting the identification process must not lead or encourage the witness in any way. Moreover, the person conducting the process should not even know what the accused looks like to prevent any conscious or unconscious influence on the witness.

Through Professor Wagenaar, the defense is trying to prove that the American police officer Anargyros Keriakis failed to comply with some of those rules when he conducted identification procedures in Kosovo as a UN police inspector. He asked various persons to identify the persons accused of the crimes in the Lapusnik camp. The photo spreads with six photographs of persons who all looked alike were shown to former detainees from Lapusnik. Several of them were able to identify Fatmir Limaj, also known as Commander Çeliku and Isak Musliu, also known as Qerqizi. In the cross-examination of the American policeman in early April this year, the defense counsel claimed that Keriakis had not told the witnesses to whom he had shown the photo spread that they did not necessarily contain the photograph of the accused, and that Keriakis had suggested the names of the accused to some of the witnesses, because he wanted to "nab them at any cost."

In his cross-examination of Professor Wagenaar, prosecutor Alex Whitting noted that any omissions in the identification procedure did not invalidate the entire test, but the Dutch expert maintained that any mistake "made the test weaker", up to the point where it was rendered completely unreliable and useless.

In the rebuttal phase, both the defense and the prosecution will be filing several depositions. Closing arguments have been scheduled for the end of August, and the judgment will probably be rendered before the end of the year.