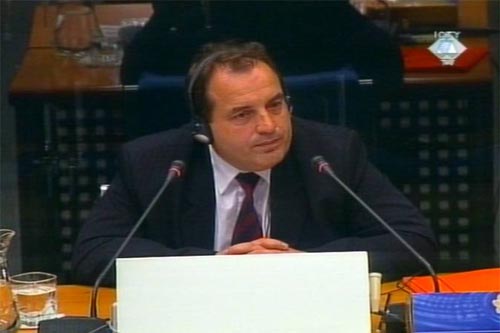 Skender Bulubashi, defense witness for Bala
In the days after the Serbian attack on Lapusnik, Haradin Bala was in the village of Banjica, not on the Berisha mountain where the detainees from the Lapusnik camp were executed, contends the defense of former KLA member accused of the abuse and murder of those detainees.

A day or two after the Serbian offensive, on 26 July 1998, defense witness Skender Bulubashi saw Haradin Bala in the village of Banjica, where Bala remained for several months, Bulubashi testified today. The prosecutor tried to show the unreliability of that alibi, putting it to the witness that Bala could have gone from Banjica to the Lapusnik area "very quickly". The witness did not agree with this suggestion.

Bala is charged with participation in the execution of 12 Kosovo Albanians suspected of collaboration with Serbs. The execution was carried out after the camp, where Bala was a guard, was closed. Two of the victims survived the shooting. One of them testified at this trial, and identified Bala as one of the three soldiers who committed the murders. They were allegedly acting on the orders of the first accused, Fatmir Limaj.

Bala's defense is also trying to prove that because of his sever health problems he could not have committed the crimes he is charged with. The first two defense witnesses testified that by 1993 he had had two heart attacks and that in 1998, the time relevant for the indictment, his health had been poor. When asked by the defense whether Bala could have walked up a mountain in July heat, Dr. Fetim Selimi, whom the accused used to visit to be examined, said, "Given his health condition, he had to avoid exposure to high temperatures and exertion."