Three character witnesses describe former KLA commander as a soldier "with a humane spirit", "politician with a bright future" and "man with a vision of a multi-ethnic Kosovo" 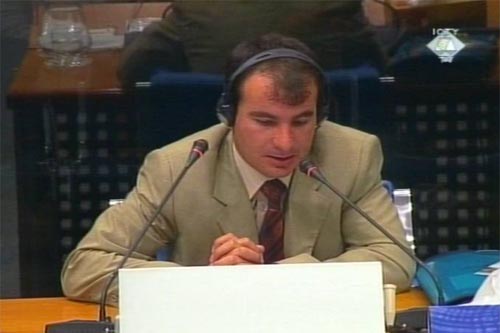 Fadil Barjaktari, witness in the Limaj trial
The testimony of a "mountain teacher" Fadil Barjaktari, completed the defense case of Fatmir Limaj today. Limaj is the first accused in the trial of three former KLA members accused of the crimes committed, according to the indictment, in the Lapusnik camp in the summer of 1998.

Barjaktari first met Limaj in September 1998 when the then KLA commander visited the Suva Reka valley, where the inhabitants of the Albanian villages in the area took shelter in the face of the Serbian offensive. There were many children among the fleeing people, and Limaj suggested that a school be set up for them, as Barjaktari recounted. The children would thus be able to learn and to avert their thoughts from the poverty, horrors of war and death. In three or four days a make-shift school was built of plastic tents, Limaj brought notebooks and pencils and Fadil Barjaktari became a "mountain teacher". Limaj continued to visit the school, talking to children and teaching them how to take shelter from the shells that would occasionally hit the area where the refugees were.

Barjaktari was the third witness to testify about the character of the accused and his "humane spirit", as he put it. He was preceded by Canadian Carol McCoo who spent three years as the director for civil society and rule of law at the OSCE Mission in Kosovo, and Bajram Rexhepi, former Kosovo prime minister. They spoke about the accused as a "politician with a bright future" and "a man with a vision of a multi-ethnic Kosovo". The prosecutor did not cross-examine the character witnesses because they spoke about Limaj and his actions after the period covered by the indictment. Character testimony may be relevant for the sentencing, if the Chamber finds the accused guilty.

Haradin Bala's defense case begins on Tuesday. The prosecutor alleges that he was a camp guard and that in late June 1998 he took part in an execution of a dozen Kosovo Albanian detainees in the Berisha mountains. They were allegedly "collaborators" and were evacuated from Lapusnik before a Serbian onslaught.