HAND GRENADES AS "A MESSAGE"

Cross-examination of Rexhep Selimi, defense witness at the trial of three former KLA members accused of the crimes in the Lapusnik camp 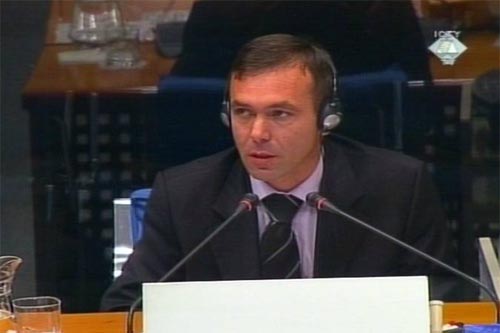 Rexhep Selimi, witness in the trial of three former KLA members charged with crimes in the Lapusnik camp
After Rexhep Selimi, former commander and member of the KLA Main Staff, said at the beginning of his cross-examination he had never targeted Serbian civilians, the prosecutor showed footage from a BBC documentary in which the witness describes an action he carried out in 1996. He threw a hand grenade at a refugee centre near the medical secondary school in Pristina. Selimi recounts how, after lobbing the grenade, he bought a hamburger from a stall nearby and then calmly walked past the police gathered at the scene of the explosion.

Selimi, however, does not consider this to be an "attack on civilians". There were no casualties, no one was hurt and his intention was to "send a message," as he claims. The purpose of the explosion, according to Selimi, "was to make the Serbian colonists from Croatia aware of the situation" and to let them know that they "came from one war into another". Selimi goes as far as to claim that those people "should be grateful" for that. Prosecutor Alex Whitting could not see what Selimi meant. He asked him, "Excuse me, grateful for what? For the grenades?" "No," Selimi replied, "for the fact that we warned them a new war was ahead."

The prosecutor and Fatmir Limaj's defense witness could not see eye to eye on other issues they discussed, such as whether the KLA arrested and detained civilians between 1997 and 1999. Selimi stubbornly said that he had never "received any such reports" and that he "never saw that". He added that he had heard of it "only from the Serbian propaganda". Limaj is the first co-accused at the trial of former KLA members accused of the crimes in the Lapusnik camp.

According to him, people could not have been detained, because "the KLA did not have any detention facilities". When the prosecutor asked him to define "detention facilities", Selimi replied that those were "fortified facilities where people are kept in detention for longer periods of time." He was unable, however, to describe them in greater detail because he himself had "never been in prison." When the prosecutor proffered his definition of a "detention facility" as "any building or location where people are kept against their will", Selimi repeated that the KLA "did not have any prisons."