Prosecutor believes that in an attempt to move out of the time frame of the indictment, Fatmir Limaj is trying to “shift the calendar” and move what happened in the spring of 1998 to the summer, while pushing the summer events forward to autumn. 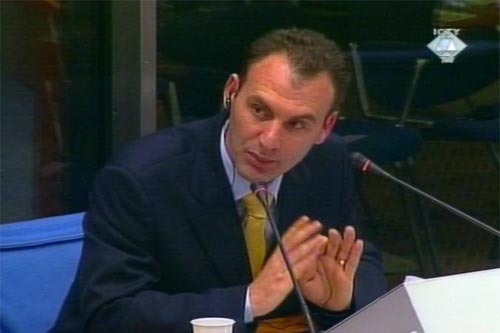 Fatmir Limaj testifying in his own trial
On the second day of his cross-examination as a witness, Fatmir Limaj - the accused in the trial of the three former KLA members accused of the crimes at Lapusnik camp - reproached the prosecutor several times for twisting and misinterpreting deliberately some of his public statements made after the war in Kosovo.

For instance, when talking about the group that arrived in Kosovo from Switzerland via Albania in March 1998 – which, among others, included Limaj and Hashim Thaci – Limaj referred to it in a TV interview as the “true KLA leadership since the start”, but he never – as the prosecutor claims – counted himself among those leaders. Statingt that “it should be interepreted differently”, Limaj explained today that “Thaci was part of that leadership”, while he himself joined later, during the war.

Similarly, according to the witness, the prosecutor “misinterpreted” an insert from a 2002 documentary in which Limaj explained that the KLA had an “authentic military and political structure, with a clear vision and platform” in May 1998. When asked by the prosecutor whether it meant that an organized military structure already existed back then, Limaj said: “This is your interpretation”, and claimed that the “interview says something else altogether.”

Limaj did not have to explain what that something “else” was, since that is the essence of his defense. He claims that in the spring of 1998 the KLA was a “guerilla movement” with no command structure, which was to be established only in August 1998 when the brigades and operative zones were formed and he became the 121st brigade commander. The indictment for the Lapusnik crimes – in which Limaj is charged as a KLA commander in the zone where the camp was situated – covers the period between the beginning of May and the end of July 1998.

Fatmir Limaj had problems not only with his own statements today, but also with the testimonies of his former co-fighters such as Jakup Krasniqi, Redzep Selimi, Shukri Buje and other KLA commanders, who testified under subpoena. All of them, more or less unwillingly, confirmed before the Tribunal that Limaj, also known as “Commander Celiçu”, was the KLA commander in the area of Lapusnik at the time covered by the indictment. Since the prosecutor reminded him of their testimonies, Limaj responded that what they “said was wrong”, that the prosecutor was “misinterpreting” it, or that the testimonies referred to the period after the brigades had been formed, after August 1998.

The prosecutor described such responses by Limaj as the attempts to “shift the calendar” or to move what happened in the spring that year to the summer, while pushing forward the summer events to autumn in order to move the events out of the time frame of the indictment.