The accused protested after the prosecutor said he would ask him no more questions about the victims of Lapusnik, since his view was that "there had been no camp, torture, abuse and murder there" 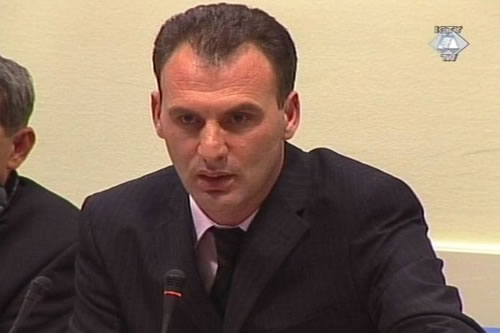 Fatmir Limaj in the courtroom
Accused Fatmir Limaj is "saddened and shocked" by the way in which at the end of today's cross-examination the prosecutor presented his claims about the plight of the Serbian and Albanian civilians detained, according to the indictment, in the KLA base in Lapusnik during the summer of 1998. Just before Limaj complained to the judges, prosecutor Alex Whitting said he would ask no more questions about the victims, since it was his view that "there had been no camp, torture, abuse and murder" in Lapusnik.

The prosecutor did not misrepresent the view Fatmir Limaj expounded in the five days of his testimony so far: that "there had never been any camp" in Lapusnik and that he "had never even heard of any such thing", until he read the indictment which "shocked him." When the prosecutor reminded him of the testimony of Shukri Buja, who testified that he had gone to Lapusnik to try to have prisoner designated as L-7 released, Limaj replied that "people would be detained for a day or two everywhere", because they would be "stopped and detained" in order to check their identity and intentions. In his testimony, Buja said that after he had given guarantees for the prisoner to Limaj - L-7 had been released. Limaj however claims that this is not true. He denies that he threatened L-7 before his release not to tell anyone about Lapusnik and that otherwise he would "kill him".

The prosecutor today presented documents that were found after Limaj's arrest and transfer to The Hague during the search of his apartment in Pristina. Documents deal with the surveillance and kidnapping of Albanians suspected of collaborating with the Serbs. There is also mention of the names of some prisoners in Lapusnik who were killed in the Berisha mountain after the camp was evacuated in late July 1998, as alleged in the indictment. Limaj, however, claims that these are the documents of the Kosovo Defense Ministry. He was their spokesperson for a time after the war. Since the Ministry moved into the building of an insurance company, the documents were "temporarily placed" in his apartment, Limaj claims, adding that he had nothing to do with them.

The prosecutor then asked a series of questions about specific prisoners detained in the Lapusnik camp: Vojko and Ivan Bakrac, who were handed over to the International red Cross after seven days of detention; Stamen Genov and Djordje Cuk, whose bodies were found in Klina, and three Russian reporters and their interpreter, Shaban Hoti, a teacher of Russian language. According to witnesses, he was killed in Lapusnik. Limaj says he first heard about the father and son Bakrac when they came to testify in The Hague. As for the evidence about the fate of Genov and Cuk, he claims this was planted by "the Serbian police".

The prosecutor then said he would ask no further questions about the victims, which "saddened and shocked" Fatmir Limaj. His testimony will continue tomorrow.