During the cross-examination of General Obrad Stevanovic, Slobodan Milosevic's defense witness, the prosecution showed a video tape of the execution of six young prisoners of war. They were shot dead by members of Skorpioni, a paramilitary unit. The prosecutor claims it was under the control of the Serbian MUP 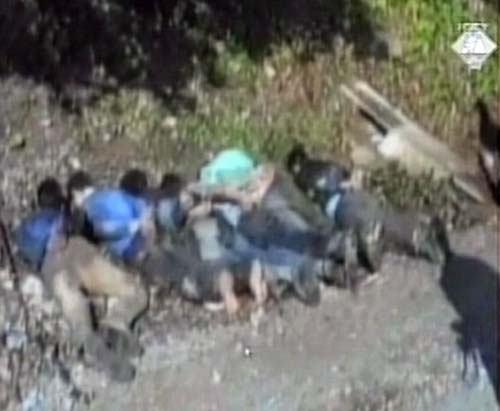 Imprisoned young men just before being shot around Srebrenica
Over the past decade, dramatic testimonies of dozens of people - survivors of executions in the wars in Croatia, Bosnia-Herzegovina and Kosovo - have been heard in the courtrooms of the Tribunal in The Hague. Yet, today for the first time the court saw the very moment when prisoners of war were executed. The tape was made by the executioners themselves.

The footage was filmed in July 1995 in the Srebrenica area. We first see the six captured youths on the floor of a truck. Their hands are tied behind their backs. After the truck stops, the youths are taken off one by one and ordered to lie down by the roadside. They are then taken uphill and told to stop. The executioners order the youths one by one to take a few steps forwards. As each man does so, the executioners fire a burst into his back. After they shot and killed the first four, the remaining two have their hands untied and are told to move the bodies. They are then shot themselves.

The prosecutor claims the killers were members of the Skorpioni unit, a paramilitary group linked with the Serbian MUP (Ministry of Interior). Their base was in Djeletovci, in Baranja. Police general Obrad Stevanovic, Milosevic's defense witness, saw them there in 1995 on several occasions.

Republika Srpska MUP documents seized by the prosecution show that in late June 1995, the Skorpioni took part in the fighting in Bosnia-Herzegovina, together with some other units of the Serbian MUP and local police. The video footage shows their trip from Djeletovci, via Pale, to the command in Trnovo and the front line on the Treskavica mountain. According to the prosecutor, in the second half of July, the Skorpioni moved to the Srebrenica area and participated in the massacre of Bosniak prisoners of war.

The prosecutor claims that this group could not have entered Bosnia-Herzegovina from Serbia without the "complicity of those who controlled the border area". In his view, General Stevanovic "had to have known about it," because at that time he was in charge of security in the border area there. General Stevanovic denies the allegations. He claims there were no links between the Skorpioni and the Serbian MUP. Milosevic's defense witness "absolutely" rules out the possibility that the Skorpioni could have been under the control of the Public Security Sector in the Serbian MUP, where he was an official at the time. As for the State Security Sector, he says he has "no knowledge of that."

The prosecutor showed the witness photographs of some twenty members of that paramilitary group that had been identified, but General Stevanovic said he did not know any of them, not even their commander Slobodan Medic a/k/a Boca. He said earlier he had met Boca two or three times in Erdut and confirmed he remembered his nickname. The photographs of some of the persons who participated in the execution of the six youths were also shown. The executioners were identified as Slobodan Davidovic, Pero Petrasevic and two men whose last names were not known: Aleksandar and Sasa a/k/a Vuk.

As the hearing today drew to a close, the prosecutor highlighted two interesting pieces of information he was able to find in the MUP materials disclosed by Milosevic's defense. One of the documents says that in 1998, the Special Operations Unit (JSO) had its headquarters in a part of the Dubrava prison in Kosovo. The prosecutor described the unit today as "Simatovic's unit, commanded by Legija and controlled by Stanisic". Another document, from the Justice Ministry, states that special forces of the Serbian MUP entered the Dubrava prison on 22 May 1999, at 5 a.m., and that the regular prison guards took up positions outside of the prison. The document does not say that NATO airplanes bombed the prison at 6:10 a.m. on that day, or that almost 100 prisoners were killed in the air strikes, as the defense claims. The prosecution's claim – and according to prosecutor Nice, this Justice Ministry document confirms it – is that there were no air strikes on 22 May, but that the "specials" massacred the Albanian prisoners in Dubrava as a reprisal for previous air strikes.