MILOSEVIC'S SERBIA: WAS IT A POLICE STATE?

Slobodan Milosevic's defense witness dismisses as untrue the prosecutor's claims that in the last decade of the last century Serbia was a police state, where the population lived in fear and whose political leader could use the police force – which could act with impunity – as he saw fit 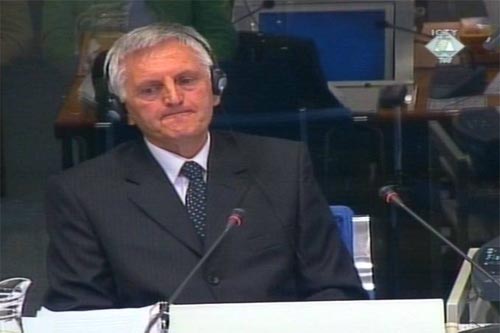 Obrad Stevanovic, witness in the Milosevic trial
Police general Obrad Stevanovic, testifying in defense of Slobodan Milosevic, dismissed today as untrue the claims made by prosecutor Geoffrey Nice that in the last decade of the last century Serbia was a police state, where the population lived in fear and whose political leader could use the police force – which could act with impunity – as he saw fit.

According to Stevanovic, who was the assistant minister of the interior at the time, Serbia did not live in fear of the police but of "terrorism and of the war being carried over to its territory". The police, he added, did not act on the orders of the "political boss" Milosevic, but on the orders of the minister of the interior, "strictly in compliance with the law."

The prosecutor, however, stuck to his arguments, noting that in Serbia at that time, assassinations of major figures were "the order of the day", quoting the murders of Badzo Stojicic, Slavko Curuvija, prominent Kosovo Albanians Kelmendi and Agani, of Pavle Bulatovic, Arkan, Stambolic, and finally of Djindjic. Most of the murders remain unsolved. At least in three of the cases, the prosecutor contends, the clues led to "the people in the MUP". When he showed the witness the famous video recording from the celebration of the Red Berets' anniversary in Kula in 1997, the prosecutor paused the tape in places where Legija and Zvezdan Jovanovic, suspects in the murder of PM Djindjic, can be seen in the company of the accused Milosevic.

In order to elaborate his thesis on Milosevic's police state, the prosecutor referred to the testimony of General Aleksandar Vasiljevic. He testified that the state security service in Serbia had put under its control the military security service. Nice also referred to the minutes from a meeting of the so-called Council for the Harmonization of Views on State Policy, where the incident in which the Serbian MUP raided the Federal SUP building in Belgrade in October 1992 was discussed. General Stevanovic himself commanded the action. He denied that force had been used and that the employees of the federal police had been prevented from entering their offices.

“This is not true," – Stevanovic claims, adding that the Serbian MUP set up a "new mechanism for the control and admission" into the building. The Federal SUP employees refused to accept it and it thus "seemed as if they had been prevented from entering." During the examination-in-chief, General Stevanovic denied the prosecutor's claims about the firing of ethnic Albanian police officers. He said that "they stopped working of their own accord, while claiming they were fired."

In an interview OTP investigators conducted with him as a suspect a few months ago, General Stevanovic said that the Special Operations Unit (JSO) of the Serbian MUP had been established in 1991. The founder and commander of the unit, Franko Simatovic, said the same at the ceremony in Kula in May 1997. Today, after he was shown the tape of Simatovic's statement, Stevanovic said he had told the investigators the JSO had been established then because "they asked a leading question."

In the meantime, Stevanovic corrected himself: when he was examined by the accused Milosevic about this issue, he said that he attended the establishment of the JSO in Kula in May 1996. This would mean that the notorious ceremony on 4 May 1997, attended by the President of Serbia, marked the first, not the sixth anniversary of the Red berets. General Stevanovic dismissed as pure "boasting" the speech made by Simatovic at the ceremony, about the "war career" of the unit on the battlefields in Croatia and BH, where it was active from 1991 until 1995. According to him, the commander was boasting in order to "advertise" his unit before the Serbian president, claiming for it the exploits in the time when it did not exist at all.

The cross-examination of General Obrad Stevanovic will continue tomorrow.