HOW TO DEFINE “COLLABORATORS”?

At the beginning of the cross-examination of Fatmir Limaj, the debate focused on whether in 1998 the Kosovo Liberation Army (KLA) targeted only those Kosovo Albanians who “actively worked for the Serbian police and participated in crimes” or those “suspected of collaborating with the Serbs.” 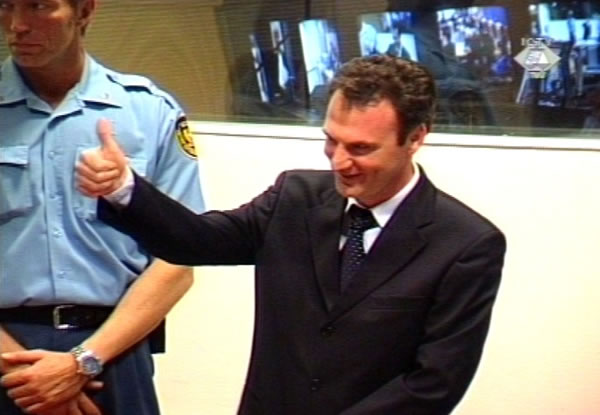 Fatmir Limaj in the courtroom
Most of the first day of cross-examination of Fatmir Limaj, the first accused in the trial of three former members of the KLA charged with crimes committed in the Lapusnik camp, passed in debating “the KLA’s policy towards collaborators.”

Last week, at the end of the examination-in-chief, Limaj described as “collaborators” Kosovo Albanians who actively worked for or collaborated with the Serbian police or the State Security Service and “participated in assassinations, arrests, searches and other forms of violence against the Albanian population.” He denied that the KLA also considered collaborators those Albanians who were on good terms with the Serbs or who did business and cooperated with them. He said that case they “would have to kill 95 per cent of Albanians,” starting with his father, who cooperated with the Serbs in 1998 and before the start of the war in 1999.

Prosecutor Alex Whiting confronted Limaj’s definition of “collaborator” with the interpretation by Jakup Krasniqi, former KLA spokesman who was summoned to testify for the prosecution in February this year. After the prosecutor reminded him that Krasniqi had testified that the KLA had targeted “collaborators who cooperated with the occupying regime and who inflicted great damage on the Albanian people and the KLA,” Limaj stood by his, much narrower, definition of collaborator, noting that the former spokesman “has given controversial and opposing statements.” If what Krasniqi said had been true, the KLA “would never have massive popular support,” Limaj said.

The prosecutor proceeded to cite several official KLA communiqués from 1997 and 1998 speaking of “killing” or “the execution of the death penalty” against “collaborators”, without indicating that they were people who worked for the Serbian police or who collaborated with them. Limaj said that “it depended on who wrote the communiqué” and insisted that most of the KLA communiqués contained such information. He added that in many cases it was not necessary to explain that it applied to Albanians who had been actively working for the police “because people in their towns and villages knew who that was addressed to and what they had done.”

Fatmir Limaj, Isak Musliu and Haradin Bala are charged with abduction, imprisonment, ill-treatment and murder of Serbs and Kosovo Albanians suspected of collaborating with the Serbian regime. The cross-examination of Limaj continues tomorrow.