PROSECUTION DOES NOT TRUST UNMIK

Despite his voluntary surrender and the guarantees issued by the UN Mission in Kosovo, the prosecution opposes the provisional release of Ramush Haradinaj. Since Haradinaj’s defense team said it would not be ready for the trial before 2007, the prosecutor asked “who would bring the accused back to the trial” if the UNMIK mission is over by then? 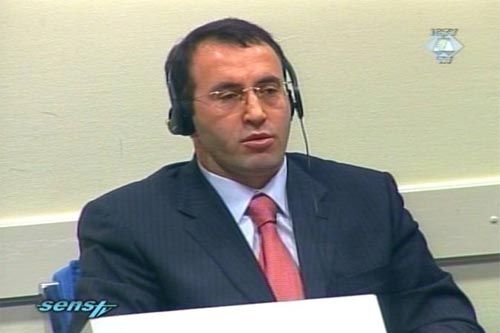 Ramush Haradinaj in the courtroom
Altough the accused surrendered voluntarily to the Tribunal no more than a day after having been handed the indictment, and despite the UNMIK guarantees that it would arrest and return him to the Hague should he attempt to escape or endanger any potential witness, the prosecution vehemently opposes the provisional release of Ramush Haradinaj, former KLA commander and until recently, prime minister of Kosovo.

At today’s provisional hearing on the defense motion to release the accused pending trial, Prosecutor Dermot Groome voiced doubts about the ability of UNMIK and of the international police to do what they had undertaken to do in a “letter of guarantee” for Ramush Haradinaj. As an example of UNMIK and international police inefficiency he said that Fatmir Limaj – just days after the representatives of the UN Administration in Kosovo handed a Tribunal’s arrest warrant to him in February 2003 - “went quietly to the Pristina airport and left Kosovo unhindered.” Citing UNMIK documents, the prosecutor pointed to the fact that “the number of international police members has fallen drastically” since 2003, and that in the past six months “the process of switching responsibility to the local police has gathered pace.” Finally, he stressed that the UN Mission in Kosovo is of “temporary character” only. Since Haradinaj’s defense team said it would not be ready for the trial before 2007, he asked “who would bring the accused back to the trial” if the UNMIK mission is over by then?

Admitting that it is impossible to predict the future status of Kosovo, the UNMIK representative Laurence Rosin said at the hearing he believed the institutions being established there with the help of the international community would be capable of “securing the rule of law.”

Ramush Haradinaj’s British defense counsel, Ben Emmerson, believes that all the conditions have been met to grant provisional release for the accused pending trial. Haradinaj is a “statesman who leads by his example” and “a man who has never done or said anything to obstruct justice or intimidate witnesses” , Emmerson said. Therefore, according to the defense counsel, “his word can be trusted” that he would return to stand trial and that, while on provisionally release, he would not seek to influence potential witnesses. If he is granted provisional release, the defense counsel said, Haradinaj “would be reluctant to renounce his right to speak as participant of the peace process in Kosovo”, but he would accept a likely ban of his political activity imposed by the Tribunal.