KOSTA BULATOVIC IN THE DOCK

Former leader of the Kosovo Serb "resistance" tried on contempt of court charges, after he refused to answer prosecutor's questions in the absence of Milosevic who was ill . Judgment will be delivered on Friday, 13 May. 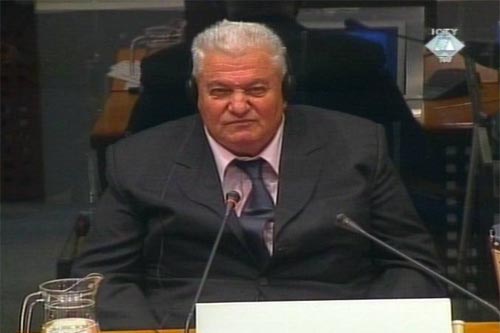 Kosta Bulatovic, witness in the Milosevic trial
After he testified at the trial of Slobodan Milosevic on 14 and 25 April, Kosta Bulatovic returned to the courtroom, but this time he was in the dock. He was charged with contempt of court because he " willfully and knowingly obstructed justice, by contumaciously refusing to answer questions asked by the prosecutor." When asked how he pleaded on that count, Bulatovic replied, "Not guilty."

At the beginning of the trial, Bulatovic's defense counsel Stephan Bourgon made a few "preliminary objections", challenging the jurisdiction of this Chamber to try Bulatovic on contempt charges, claiming that the judges – when they decided that Bulatovic should continue his testimony in the absence of Milosevic who was ill – made an "error in law". The Chamber, however, dismissed all his objections, with Judge Bonomy remarking that Bulatovic – even if the Chamber had made an error – was obliged to answer the questions, because this was how "one shows respect of court".

Defense counsel Bourgon then called and examined two witnesses, who spoke about Kosta Bulatovic's state of mind between 19 and 25 April, after the Chamber warned him that if he continued to refuse to answer the prosecutor's questions he would be charged with contempt of court. Dragutin Milovanovic was with Bulatovic in The Hague in April. He testified that Bulatovic believed "he would be handicapped in the absence of President Milosevic", and thus asked for his testimony to be postponed until Milosevic got well.

The second witness was Branko Rakic, one of Slobodan Milosevic's legal counsel. With the approval of the Chamber and Slobodan Milosevic, he met with Bulatovic in the evening of 19 April, trying to persuade him to change his attitude. He failed, however, since Bulatovic, as he recounted, "thought he would be causing harm to Mr. Milosevic."

In his closing argument, defense counsel Bourgon stated that Kosta Bulatovic did not “willfully and knowingly obstruct justice" and that he should therefore be acquitted on the charge of contempt of court. The judgment will, as announced, be delivered on Friday, 13 May.