Testimony of Professor Slavisa Dobricanin at the trial of Slobodan Milosevic is followed from the public gallery by Finnish pathologist Dr. Helen Ranta. The judges have ordered her to be "at the disposal of the parties" if they decide they want to ask her a few questions after the end of the testimony of the Serbian pathologists who contests her report on the events in Racak 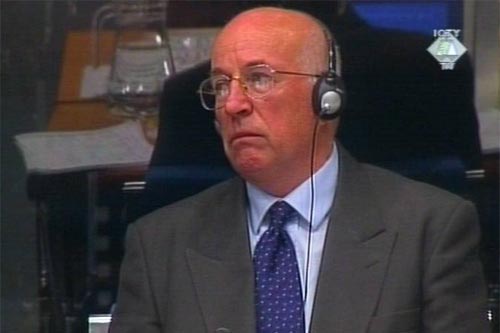 Slavisa Dobricanin, witness in the Milosevic trial
As Professor Slavisa Dobricanin, former director of the Forensic Medicine Institute in Pristina, continued his testimony today, he was watched by from the public gallery by Finnish pathologist Dr. Helena Ranta, leader of the EU forensic team that was involved in performing autopsies of victims from the Kosovo village of Racak.

As a court witness, Ranta had previously testified about the findings of her team in March 2003. Last week, Dobricanin contested her conclusions, competence and integrity as he answered questions put to him by Slobodan Milosevic. This time, Ranta returned to The Hague on the invitation of the prosecutor. At the beginning of the hearing, the presiding judge ordered her to be "at the disposal of the parties" if the prosecution or defense decide they want to ask her some additional questions after Professor Dobricanin's testimony.

The main objection of the Serbian pathologist to his Finnish colleague related to her conclusion that on the bodies of the Racak victims "there was nothing to indicate that the persons were anything but unarmed civilians." Professor Dobricanin resents the fact that she made such assessments in light of the fact that she is only a "forensic dentist". He makes the opposite claim: the victims from Racak were KLA fighters who had been killed in clashes with the Serbian security forces.

Milosevic's defense witness bases his claim on four elements: "several layers of clothes" the victims wore, "dark color" of the jackets and trousers they wore, "gunshot residue tests" which showed traces of nitrates which might indicate that they had fired weapons and finally, "different bullet trajectories" for rounds that had hit them.

In the cross-examination, prosecutor Daniel Saxon went through all those elements in detail. He showed a photograph of Professor Dobricanin taken in Racak on 17 January 1999 and noted that both the witness and his escort were dressed "in several layers of clothes". The witness confirmed that and added that even yesterday, when "some people were sunbathing" he was "wearing several layers of clothes since he likes to keep warm". The prosecutor, however, did not want to "draw any conclusions on that, except for the fact that it was cold in January 1999 in Racak."

In addition to the element of "different bullet trajectories," Professor Dobricanin confirmed the suggestion put to him by Slobodan Milosevic in the examination-in-chief that the victims had mainly been shot to the head or chest, which, according to the accused and his witness, indicates that they were in trenches. The prosecutor first showed the photograph of the bodies of the three brothers Metushi, taken on 15 January 1999, at the site where they bodies had been found, and then a series of photographs and sketches made during their autopsy. The three brothers had been shot from the back, and several rounds hit them in the foot, lower leg, thigh and lower parts of the body. Professor Dobricanin explained that they had been "shot from below, as they were fleeing the trenches up a steep hill."

After he showed him a photograph from the autopsy of fourteen-year-old Halim Beqiri, hit in the back, with an exit wound in his neck, the prosecutor asked the witness if it was "possible that he was an innocent civilian", but Professor Dobricanin did not agree with that, claiming that "Albanian boys grew up sooner" and that there had been "fourteen-year-old boys who carried guns."

After the witness confirmed that in addition to being subjected to gunshot residue tests, the Racak victims had been fingerprinted, the prosecutor asked him whether – in light of the "dubious reliability of the gunshot residue test" – any tests had been run on the many rifles found in Racak to see whether they bore the fingerprints of any of the victims. The professor confirmed that this "would have been logical to do", but he did not know whether that had been done or not.