DID THE POLICE ADMIT THEY KILLED 40 PEOPLE IN RACAK?

In the cross-examination of Judge Danica Marinkovic, the prosecutor quoted from a document from the district public prosecutor in Pristina which says that on 15 January 1999, “40 KLA members were killed as an attack was repelled”. He asked Milosevic’s defense witness if this was in fact “a written admission that the police killed those 40 people”. The witness disagreed. 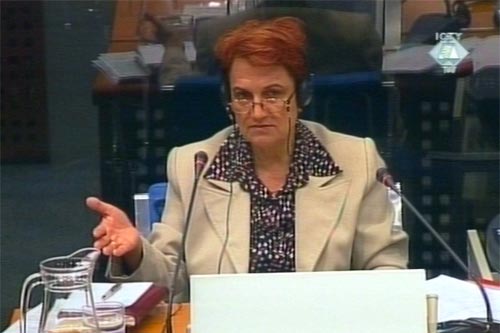 Danica Marinkovic, witness in the Milosevic trial
The official version of the events in the Kosovo village of Racak on 15 January 1999, put forward by the Serbian police and politicians, and presented by Milosevic's defense witness Danica Marinkovic before the ICTY, was today contested by prosecutor Geoffrey Nice during the cross-examination.

Two weeks ago, as she answered questions put to her by the accused, former investigative judge of the Pristina District Court described how she carried out an investigation on 15 and 18 January 1999 in Racak, finding the bodies of 40 victims in the mosque and discovering the headquarters, weapons and trenches of the KLA in and around the village. On the basis of her on-site investigation and the autopsies of the victims, Judge Marinkovic concluded that these were not unarmed civilians, but “members of a terrorist band who had been killed in battle, from a distance.” According to her, this was shown by the fact that all the victims had “identical leather belts”. Judge Marinkovic also categorically denied the claims that the village had been shelled and that VJ forces had taken part in the attack.

As he cross-examined Judge Marinkovic about the events in Racak, the prosecutor asked her if she had spoken with the local residents, survivors in the village, MUP personnel that had taken part in the action or VJ troops that had also allegedly been involved about the events of 15 January 1999. He showed her a photograph of a boy that had been wounded on 15 January and who had showed the members of the Verification Mission the location where he had been shot after his discharge from hospital. He also quoted a statement by Canadian general Maisonneuve who was told by Lieutenant-Colonel Petrovic, liaison officer from the 243rd Brigade, VJ, in Urosevac, that Racak “was done by the MUP” and that the army provided fire support with one tank and one anti-aircraft gun.

Judge Marinkovic replied that she had not talked to the inhabitants of Racak or the survivors and scolded the boy from the photograph for “failing to come forward and give a statement to someone.” She added that she did “not have the authority” to question soldiers or police officers and she stood by her statement that on 15 and 18 January she had not “seen any troops” in Racak.

The prosecutor then showed the witness a series of photographs depicting victims laying where they were found, insisting on the belts which were all different. Judge Marinkovic said that those were not the same bodies she had found in the local mosque on 18 January, persisting in her claim that the “victims from the mosque” had had identical belts.

In the course of her examination-in-chief two weeks ago, Judge Marinkovic presented records of the interrogation of several Kosovo Albanians who identified some of the Racak victims as KLA members. During the Easter break the prosecutor located three of the persons whose statements were quoted by the witness. They all stated to the OTP investigator that they had signed their statements under duress, after they had been arrested, beaten and tortured in the police stations in Urosevac and Stimlje. Judge Marinkovic, however, ruled out the possibility that the police in Kosovo had used such methods and claimed that those people now “denied what they had said”, probably for reasons of personal safety.

After quoting a document from the district public prosecutor in Pristina which says that on 15 January 1999, “40 KLA members were killed as an attack was repelled,” the prosecutor asked Judge Marinkovic if this was in fact “a written admission that the police killed those 40 people”. The witness disagreed. According to her, this is “not an admission”, but merely a statement that “there was a conflict involving two sides which resulted in casualties listed there.”

The event in Racak resulted in the district public prosecutor filing a criminal report against “persons unknown”, responsible for the wounding of a police officer. As for the other casualties, the conclusion was that “there is no cause for any proceedings.”