SOME WERE SOLDIERS AND OTHERS WERE NOT CIVILIANS

According to Professor Dobricanin, the Racak victims who wore dark clothes were KLA members, while those in light-colored clothes “were not civilians”, but soldiers too, or members of the village guard. They did not have dark clothes, and “had to wear whatever they had” 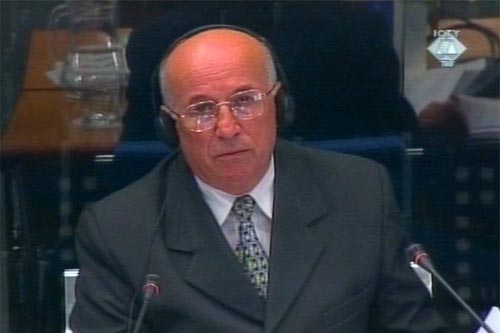 Slavisa Dobricanin, witness in the Milosevic trial
After the prosecutor informed the judges at the beginning of the hearing that forensic expert Dr. Helen Ranta was again in the public gallery, ready to take their questions, the judges decided to let her leave the Tribunal if she wished to do so and go back to Finland. They apparently decided that in the light of Professor Dobricanin’s testimony, there was no need to re-examine the leader of the EU forensic team. In March 2003 she had testified about the results of the investigations of the Racak incident. Professor Dobricanin, former director of the Forensic Medicine Institute in Pristina, is testifying as Slobodan Milosevic’s defense witness. In the past few days, he has been trying to bring into question Dr. Ranta’s findings, expertise and integrity.

At the end of Professor Dobricanin’s cross-examination, prosecutor Daniel Saxon summarized the problem the court faced with the Racak incident. Forty bodies of people “who had been shot from several directions, and hit in different parts of their bodies” were found in the village in Kosovo and around it on 15 January 1999. Among them were “people in dark clothes, but also those who wore lighter clothes.” There were “people wearing several layers of clothes, but one must bear in mind that it was winter.” Furthermore, the prosecutor continued, “we have gunshot residue tests (done on the victims’ hands), but we do not have any official documents about the results of the analysis.” There are also indications that the gunshot residue tests were “not carried out in optimal conditions.” On the other hand, the EU forensic team found bullets and body parts underneath the bodies in some cases, but there is no information about any weapons having been found near the bodies. When one bears all that in mind, the prosecutor asked, could one of the conclusions be that those were all “unarmed people, killed on the spot where they were found?”

“No, this is your conclusion, not mine,” Professor Dobricanin replied categorically. He stuck by the four elements he listed that led him to conclude that the Racak victims were not civilians. Just a reminder: the elements are “several layers of clothing”, “dark clothing”, “gunshot residue tests” and the fact that the victims were hit by “bullets coming from different directions.”

After he discussed yesterday the elements of the “several layers of clothing” and “different directions” from which the victims had been hit, the prosecutor today tried to challenge the remaining two Dobricanin’s elements. He showed several photographs of the victims wearing clothes or shoes of lighter or even bright color and asked the witness if those had been civilians. The witness disagreed and noted that “the large majority of the victims wore dark clothing such as that worn by the KLA members or village guards”, while those who did not have any dark clothes wore “whatever they had.” The professor was unable to answer the question how then a police officer entering the village was supposed to tell civilians from KLA members.

The Serbian pathologists’ report on the autopsy of the Racak victims notes that gunshot residue tests were positive for 37 of the 40 victims. There are, however, no official document to corroborate the findings. Professor Dobricanin says they “had no time” to include that into the report and that all the documents pertaining to gunshot residue tests were destroyed when NATO bombed the SUP building in Pristina. While the witness claims that the Racak victims were fingerprinted after the gunshot residue tests, in order to avoid contamination, the prosecutor today presented documents from the Pristina SUP whish seem to show, at first sight, that 24 victims were fingerprinted as early as on 18 January, before gunshot reside tests were run. Professor Dobricanin claims, however, that this is a “misunderstanding” and that the crime scene technician probably made a mistake as he filled in the form and put in as the date of fingerprinting the date when the bodies were taken from the mosque in Racak to the Forensic Medicine Institute in Pristina.

A status conference to discuss the course of Slobodan Milosevic’s defense case has been scheduled for tomorrow morning.