In Slobodan Milosevic’s opinion, testimony of Professor Ratko Markovic on constitutional cases that precede the break-up of Yugoslavia is relevant because it shows that the conflicts in which war crimes were committed were the result of “illegal and violent secession” and not of any “joint criminal enterprise” that the prosecutor has charged Milosevic with 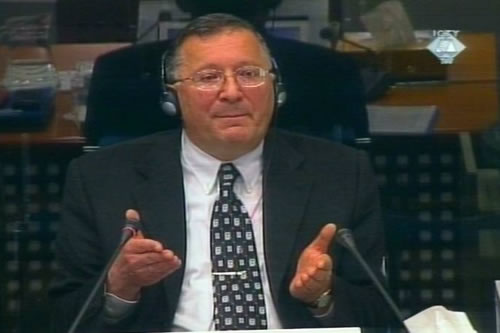 Ratko Markovic, defense witness for Milosevic
ICTY will not rule on whether the secession of some republics of the former Yugoslavia was illegal or not, but on the events that followed and that were described in the indictments against Slobodan Milosevic. Judge Robinson made this remark today as Professor Ratko Markovic, Miloevic’s defense witness, continued his testimony.

Judge Robinson then invited the parties to state whether in their opinion the legality of the secession had any significance in the case before the Chamber.

Milosevic considers that it has, because, as he said, “the illegal and violent secession caused armed conflicts… in which all sides committed crimes.”

According to defense counsel Steven Kay, the issue is important considering the “position of the accused as the head of state, his state of mind and the context in which he reacted to the developments.”

Prosecutor Geoffrey Nice, however, considers that this issue “has no bearing on the legal responsibility of the accused,” since, as he noted, “the illegality of the secession, or his belief that the secession was illegal, cannot be used to justify war crimes.” In his opinion, the only legally relevant issue in this area is the date when Croatia gained independence, because as of that date internal hostilities turned into an international conflict in which the Geneva Conventions apply. Milosevic has been charged with grave breaches of the Geneva Conventions.

After the parties presented their views, Judge Robinson asked Milosevic whether it was his argument that the “acts he has been charged with are the result of the secession and unconstitutional actions of some republics and not the result of joint criminal enterprise, as the prosecution alleges.”

Milosevic, however, denies that this has anything to do with his acts, or the acts of Serbia. The war in the former Yugoslavia, he contends, was a “conflict between illegal paramilitary formations of the republics and the then JNA, not Serbia,” whose president he was at the time. Milosevic asks: “What does Serbia have to do with the fact that the Croatian paramilitary formations blocked the barracks and thus provoked a conflict with the JNA?”

The Judge observed that the constitutional issues that Professor Markovic was testifying about were relevant for the Milosevic case to a certain extent, but he told the witness that there was “no need to present so many details which might sidetrack the Chamber.”

Professor Markovic then spoke in detail about the amendments to the Serbian Constitution, adopted in 1989 – he himself participated in the drafting of the constitution as a “representative of the profession and science.” He confirmed Milosevic’s argument – which is contrary to the claims made by the prosecutor – that those amendments did not abolish the autonomy of Kosovo and Vojvodina. The provinces, he said, were merely “stripped of their right to veto amendments to the Serbian Constitution.” In Markovic's opinion, the amendments “prevented the secession of Vojvodina and Kosovo.”

For the remainder of his examination-in-chief, which will continue tomorrow, Professor Markovic is going to discuss the negotiations in Pristina in 1998 and in Rambouillet in 1999, where he headed the delegation of the Serbian government.