Former military attaché from the British Embassy in Belgrade gave testimony at the trial of three former KLA members, charged with crimes against Serbs and Albanians detained in the Lapusnik camps in Kosovo in 1998 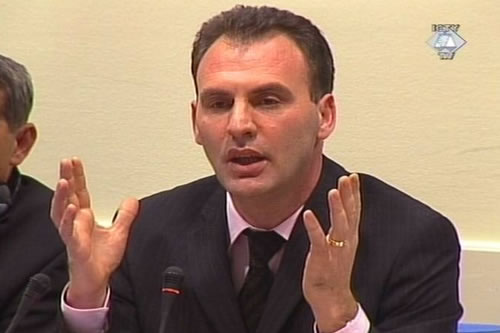 Fatmir Limaj in the courtroom
Did British colonel John Crosland meet Commander Celiku at the KLA headquarters in Malisevo in July 1998 and was this commander the same person as Fatmir Limaj, the first accused at the trial of three Kosovo Albanians charged with the crimes in the Lapusnik camp?

This issue remained unanswered at the end of two-day testimony of Colonel Crosland. He was the British military attaché in Belgrade from 1996 to 1999. In this capacity, Colonel Crosland spent most of the year 1998 in Kosovo, monitoring the developments in the conflict between Serbian security forces and the Kosovo Liberation Army (KLA). In July 2002 he testified about his observations from Kosovo at the trial of Slobodan Milosevic. This time he was in The Hague as a prosecution witness at the trial against three former KLA members: Fatmir Limaj, Isak Musliu and Haradin Bala. He testified at both trials under his full name, but with facial distortion. His appearances in court were authorized by the British Government; in fact, its representatives were present at the trials.

In the course of Crosland’s testimony, the prosecutor tendered dozens of diplomatic dispatches in which the British Embassy in Belgrade notified Foreign Office and the Defense Ministry in London about the developments in Kosovo in 1998. The dispatches describe the increasing tension and the escalation of violence, the increasing brutality of the actions launched by the Serbian security forces, wanton destruction of villages, burning and plunder of Albanian homes, KLA ambushing police and military patrols, abductions of civilians and killing of Albanians suspected of collaborating with the Serbian authorities.

During one of his visits to Kosovo in July 1998, Colonel Crosland went to the KLA headquarters in Malisevo with his escort. There he found between 150 and 200 uniformed men carrying small arms, including a person who he concluded was of “Middle Eastern origin”. Crosland described the “heated debate” he had with the hosts after he introduced himself to them and said that as the military attaché from the British Embassy in Belgrade he had the right to move freely all over the territory of Yugoslavia. One of the KLA members then responded by saying that Malisevo was “not Yugoslavia but Albania” and threatened to detain, or kidnap, the British colonel and his escort.

Crosland testified that a KLA commander who introduced himself as Commander Celiku managed to defuse the tension by noting that any debate about the location of Malisevo was pointless. After about two hours, the British military attaché and his escort were allowed to leave the KLA headquarters.

According to the indictment, Commander Celiku was the nom de guerre of Fatmir Limaj, the first accused for the crimes in the Lapusnik case, described by the prosecution as a “regional KLA commander.” However, on the basis of intelligence at his disposal, Colonel Crosland estimates that the Malisevo headquarters were more than regional headquarters; in fact, it could well have been the KLA headquarters, at least at the time he was there.

In the cross-examination, Limaj’s British defense counsel, Michael Mansfield noted that Colonel Crosland had given three statements to the OTP investigators, yet he mentioned his encounter with Commander Celiku for the first time in his testimony before the court. The witness responded that the first time a direct question was put to him was during his testimony. When asked how he was able to link Commander Celiku with Fatmir Limaj, Crosland answered that he had established the link on the basis of reports by intelligence services collaborating with the British Defense Ministry. He added he was not authorized to disclose the reports.

Since the defense counsel insisted that he disclose the names of the intelligence services that had linked Commander Celiku with the accused Limaj, the representatives of the British Government, after a consultation, authorized the witness to specify the services. However, he did it in private session, closed to the public.