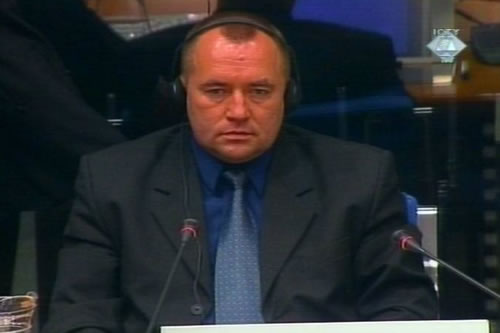 Oleg Sefjulin, witness in the Limaj trial
On 20 July 1998, Oleg Seifulin, reporter of a Russian state-owned TV channel, was stopped at a KLA checkpoint near Lapusnik and taken to a nearby farm where a makeshift camp was set up for the kidnapped Serbs and Albanians accused of collaboration with the Serbian authorities, as alleged in the indictment against Fatmir Limaj, Isak Musliu and Haradin Bala. Three more men were taken to Lapusnik with him: Shaban Hoti, a teacher of Russian from Pristina who was interpreting for the Russian team, cameraman Alexandr Galanov and sound man Viktor Manayev.

The witness said that the KLA soldiers had captured them because they had stayed near their checkpoint on the Pristina-Pec road near Lapusnik despite the orders to “go back to where they came from.” “They were armed, some were in civilian clothes, some in camouflage uniforms,” Seifulin described the KLA troops. His attempt to explain that the crew had the permission to report from Kosovo were to no avail.

After they were taken to “a house in Lapusnik,” Seifulin recounted, Shaban Hoti was taken away from the rest of the team. He saw Shaban again when he interpreted their conversation with a man “in a neat uniform who looked like a commander.” As the witness described, Hoti had obviously been beaten, “with bloodstains on his trousers and shoes” and was very scared. “He was shaking with fear,” Seifulin said.

The Russian reporter and his crew were scared too, because the KLA soldiers kept telling them that they “as Russians collaborate with Serbs, that they are surely spies and that they would have to be killed.” When they asked what would happen to Hoti, they were told that “he will now have to fight alongside them to prove that he is on their side or be killed.”

Seifulin and his crew were set free that same night. Their TV equipment was returned to them, so was the car in which they were traveling, but not the tapes they had made before their arrest. They never saw their interpreter Shaban Hoti again. His name is on the list of 22 dead detainees, attached to the indictment against the three former KLA members, charged with the crimes in Lapusnik.