GENERAL SELIMI STARTS AS UNWILLING AND ENDS UP AS HOSTILE WITNESS

Major General Sulejman Selimi, former commander of the KLA Main Staff, currently Deputy Commander of the Kosovo Protection Force, was subpoenaed to testify at the trial of three former KLA members accused of crimes in the Lapusnik camp. 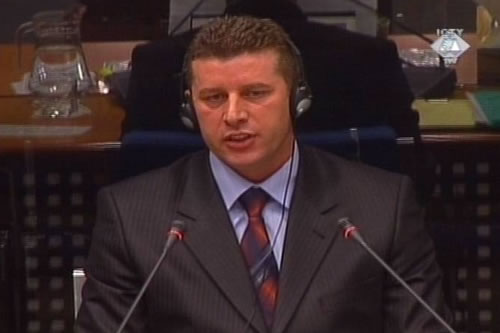 Sulejman Selimi, unwilling witness for the prosecution in the trial of the former KLA members
Thirty-four year old major-general in the Kosovo Protection Force, Sulejman Selimi a/k/a Sultan, came to The Hague as an unwilling witness for the prosecution at the trial of three former KLA members, charged with the crimes against Serb and Albanian civilians in the Lapusnik camp in the spring and summer of 1998. The defense counsel for Fatmir Limaj, Isak Musliu and Haradin Bala intended to call him as their witness, but the prosecution got there first: it applied and got from the Trial Chamber a binding order for Selimi to testify. He thus had no choice but to appear in The Hague.

The prosecution apparently decided to risk this move after a series of interviews with Selimi in 2003 in which he – as the OTP investigators saw it – showed “cooperativeness and openness.” Yet Selimi showed nothing of the sort on Monday afternoon in The Hague in the first three hours of his examination-in-chief, forcing the prosecutor to seek permission from the Chamber at the end of the hearing to treat the witness as a “hostile witness” as the examination continues. This means that the prosecutor will be able, if the judges grant the application, to cross-examine his own witness and to confront him with his previous statements which were somewhat different than his testimony in the courtroom.

The prosecution lost patience with their unwilling witness when Selimi’s answers to direct questions about the first accused, Fatmir Limaj, started to veer away from the things he had said in his previous statements. In his interviews with the investigators, defense counsel and his interview with the Zeri magazine quoted buy the prosecutor, Selimi had said he had first come to know Limaj under his nom de guerre, Celiku, and as the “commander of the Celiku units”, learning his real name later. In the interview with the Zeri magazine in 2000 Selimi also stated that the “Celiku units” fought side by side with his 113th Brigade in the battle for the Lapusnik gorge in May 1999, adding that they “got their name from the character of their commander and the way in which they had been established.” They would later become the 121st and 122nd Brigade of the KLA.

In his examination-in-chief in a Tribunal courtroom, Selimi “could not remember” how the accused had been introduced to him in their first encounter – as Limaj, Celiku or Daja (uncle). As for the “Celiku units”, he claimed that they had “operated independently” in the battle of the Lapusnik gorge, because they had “not been unified yet” and, most importantly, “they did not have a commander yet.” Those were troops without a commander, in other words. Despite all that, the KLA, as Selimi stated in his testimony earlier, did not have any disciplinary problems, and he was at one point, in early 1999, the Chief of its Main Staff. The former Chief of Staff “cannot remember” any disciplinary action that had to be taken against any KLA member, that was more severe than a caution or perhaps temporary confiscation of weapons “until that person mended his ways.”

The hearing on the prosecution application to treat Sulejman Selimi as a hostile witness will continue Tuesday afternoon. In the Tribunal practice so far, the parties have rarely resorted to such application, and the judges granted them even more rarely.