Mehmed Alagic, former commander of the Bosnian Krajina Operational Group, tried in August 1993 to “persuade the mujahedin to become part of the chain of command,” but did not achieve anything, his assistant testified 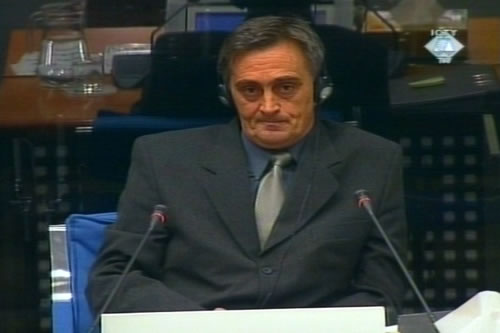 Ahmed Kulenovic, defense witness for Hadzihasanovic
“The mujahedin must be disarmed or else sent back to where they came from,” Mehmed Alagic concluded, after he had tried to negotiate with the foreign fighters in his area of responsibility, Ahmed Kulenovic said today. He was accompanying Alagic as he visited the mujahedin camp in Mehuric near Travnik.

The late Alagic was the commander of the Bosnian Krajina Operational Group in 1993. Pursuant to the instructions from the top BH Army commanders, he tried to “persuade the mujahedin to become part of the chain of command.” His efforts failed, said Kulenovic who was the operations officer on Alagic’s staff. He testified as a defense witness at the trial of the former commander of the BH Army 3rd Corps, Enver Hadzihasanovic, who is held responsible for the crimes committed by foreign nationals in Central Bosnia. Alagic was charged with the same crimes, but the charges were dropped after his death.

The defense is trying to prove that Hadzihasanovic was not superior to the mujahedin, but saw them as a problem – because of their attacks on civilians and the military actions they carried out as they saw fit – and that in June 1993 he asked the command in Sarajevo to find a solution. There followed instructions for the 3rd Corps to place the foreigners under control and to subordinate them, but, as defense witnesses testify, this went on with great difficulties.

The prosecutor believes that the Army had the capability to launch a military action to overpower the foreigners. The fact that this was not done indicates that there is a connection between the Army and the mujahedin, the Prosecutor suggests. Kulenovic believes that a conflict with the foreigners was “a luxury the commanders perhaps could have allowed themselves, but that the results would have been utterly devastating.” Opening up a new front and incurring further casualties were not an option for the 3rd Corps which in that period “was saving every bullet and every man” for the defense of the lines against the Serb forces and to beat back the HVO in the Lasva valley. “We tried to solve [the problem of the mujahedin] at another place, to find a political solution,” he said.