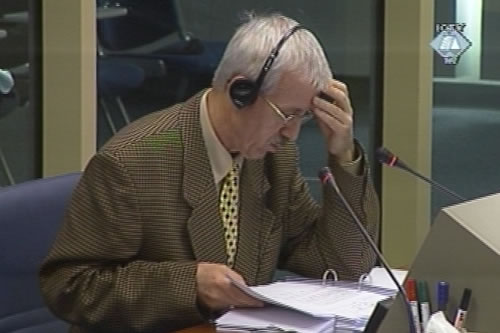 Dzemo Merdan, defense witness for Hadzihasanovic
The Tribunal’s translation service should resolve a linguistic issue that is “potentially very important” for the Hadzihasanovic and Kubura case, as the judges noted. The prosecutor quoted from a document of the BH Army 3rd Corps dated from June 1993, which refers to the “further engagement of the foreigners” in the area of responsibility of the Corps. The defense then claimed that the English translation of the document does not reflect the actual language in the document.

During the cross-examination of witness Dzemal Merdan, the prosecutor quoted from the minutes of a meeting of commanders in the 3rd Corps, held on 23 June 1993, where, according to what was said in the courtroom – Amir Kubura, then commander of the 7th Muslim Brigade asked, “Will we continue to engage the foreigners?” Prosecutor Daryl Mundis suggests that this indicates the mujahedin “were part of the 3rd Corps even before 23 June 1993”, although the defense is trying to prove that they were totally out of control and that the procedure to incorporate the foreigners into the 3rd Corps and to put them under control was initiated only in the summer of 1993, at the proposal of the BH Army Supreme Command.

Merdan, who was Enver Hadzihasanovic's deputy in the 3rd Corps, said that the topic of discussion at the meeting was the fact that “the foreigners continued to be active” and that they were “engaged in the corps area”, adding that this was causing “problems” for the Corps command.

Edina Residovic, Enver Hadzihasanovic’s defense counsel, then noted that the original sentence in Bosnian (“Will the foreigners continue to be engaged because they are getting ammunition” Will they go to Igman or will they continue to carry out missions in the 3rd Corps area?”) is vague as to who would in fact be engaging the foreigners and that the translation into English had a significantly different sense (“Will we engage the foreigners?”).

The presiding judge then asked the translators to provide an “authoritative clarification” of the contentious and “potentially important” sentence by tomorrow.