NO DUEL OF TWO MOMCILOS

At the end of the cross-examination of Momcilo Mandic, the accused Momcilo Krajisnik did not repeat the request that he be allowed to pose a few questions to his former colleague from Pale who has come to The Hague to testify as a prosecution witness 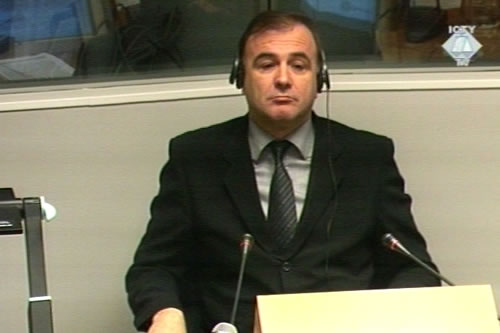 Momcilo Mandic testifying in the Krajisnik trial
Momcilo Krajisnik’s defense tried over the past few days to control the damage that some statements made by Momcilo Mandic, former justice minister in the Bosnian Serb government, might cause the former Bosnian Serb leader who is on trial for genocide and other war crimes in BH in 1991 and 1992.

In the cross-examination, Krajisnik’s defense counsel Nicholas Stewart asked Mandic to “clarify” some of the statements he had made in the course of his seven-day examination-in-chief. Mandic thus clarified what he actually had meant when he had said that Krajisnik had been informed about the situation in the camps and other detention facilities controlled by the Bosnian Serbs and that he had personally reported to him about the situation in the Kula prison near Sarajevo.

This, Mandic clarified now, does not mean that he informed Krajisnik about the “inhumane treatment of the prisoners,” because he in fact “never did see the police treat the prisoners that way.” Mandic also explained that those were not prisoners, but “persons who had been evacuated from the areas affected by war.” The problems he informed Krajisnik about pertained to “the great flow of people through the prison,” “delays in the determination of their status” and “shortages of food and hygiene”; they did not pertain to the “inhumane treatment” of those people, he explained.

After he confirmed in his examination-in-chief the authenticity of a report filed by the then Bosnian Serb minister of the interior, stating that the municipal crisis staffs were asking the military and the police to arrest, detain in prisons and ethnically cleanse as many Muslims as possible, Mandic clarified in the cross-examination that this did not include Krajisnik at all. On the contrary, Mandic claims, “Mr. Krajisnik never in any way asked that the Muslims be rounded up in camps and ethnically cleansed.”

According to Mandic, in the first year of the war, there already was a certain “rivalry” between the Assembly speaker Momcilo Krajisnik and the president of the Republic, Radovan Karadzic. As Mandic testified, Krajisnik was not happy with some “choices of personnel” made by Karadzic under the influence of Nikola Koljevic and Biljana Plavsic. The second source of discord, according to Mandic, was the relationship between Republika Srpska and Serbia. As he says, “Karadzic was much more dependent on the policies pursued by Slobodan Milosevic and Serbia,” while Krajisnik “was in favor of Republika Srpska having its own policy” both in relation to the other warring factions and to Serbia and “foreign policy in general.” Unlike Krajisnik, Karadzic was “greatly influenced by Mr. Milosevic”, Mandic says

Before Mandic actually came to testify Momcilo Krajisnik had asked the judges several times to be allowed to pose a few questions to his colleague from the Pale administration. However, now that his defense counsel concluded the cross-examination, Momcilo Krajisnik did not repeat his request. The judges who had previously rejected a similar motion by the accused did not see fit to remind Krajisnik of it. The eagerly awaited duel of two Momcilos thus did not come to pass.

Since he came to The Hague with a safe passage guarantee, Momcilo Mandic returned to Belgrade after his testimony. The authorities in Bosnia, where he is wanted for fraud, will have to wait for another opportunity to arrest him.