According to official RS data, about 10,000 Muslims civilians passed through the Kula prison between May 1992 and October 1994 - Justice Ministry personnel, former minister Momcilo Mandic claims, merely “provided technical services” in guarding the prisoners 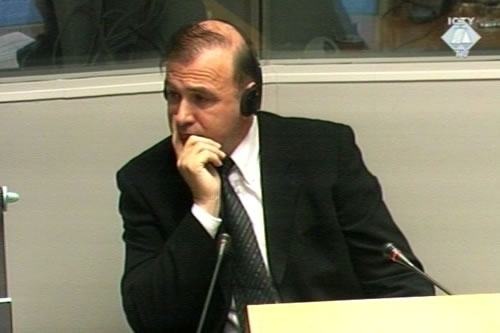 Momcilo Mandic, witness in the Krajisnik trial
In light of his long career in the police (he rose to the rank of assistant minister of the interior of BH and deputy minister of interior in Republika Srpska), Momcilo Mandic exhibited a surprising degree of ignorance today as he answered the questions put to him by the prosecutor and the judges related to certain professional issues. He was, for instance, unable to explain the difference between “captured persons and persons under arrest” or to define “preliminary operational interviews” conducted with such persons. The question put by the presiding judge, who wanted to know “what was the legal basis for the arrest of civilians for the purpose of their exchange” really put him on the spot.

On the third day of his testimony at the trial of Momcilo Krajisnik, the prosecutor moved on to the period between May and November 1992, when Momcilo Mandic was the justice minister in the then Serbian Republic of BH. As such, he had jurisdiction over prisons, including the Butmir Penitentiary and Correctional Facility, known as Kula. According to a document of the RS Central Commission for Exchanges, tendered into evidence by the prosecution, between 1992 and 1994 the prison was “used as a location where Muslim civilians were put” and about 10,000 Muslims passed through it in that period.

Mandic said he had “no reason to question this information” but he “did not know that there were civilians in Kula” – despite the fact that he had an office in the prison in 1992. If there were any, he added, “they were probably moved from the territories where there was fighting and given shelter there.” He is, however, unable to explain why the document says that they were “arrested” rather than “evacuated”.

The personnel in the Kula prison – under the Justice Ministry – merely “provided technical services”such as guard duty, security and meals… “for the captured persons and persons under arrest”, he said. Mandic claims that they were under the jurisdiction of the police and the military and that he and his ministry were powerless.

According to the official documents presented by the prosecutor, exchanges of “persons under arrest” were in the jurisdiction of Mandic’s ministry. Mandic, however, claims that the central Commission was in charge of the exchanges; representatives of the Justice Ministry, the Ministry of the Interior and the Defense Ministry all sat on the commission. The prosecutor further claims that Mandic chaired the commission for a time, proving that through intercepted telephone conversations played back in the courtroom. In one of the conversations, Mandic instructs his interlocutor to communicate directly with him in all issues relating to the exchanges, until he finds a new chairman of the Exchange Commission to replace the one who had resigned. In an intercepted telephone conversation with Momcilo Krajisnik, also played back, Mandic promises that he will personally put a certain “Dusan Savic and his family on the list for the exchange tomorrow.”

Mandic claims that the fact that Krajisnik told him: “since you are on the commission”, does not mean that he was a member of the commission but that Krajisnik and others “identified him with the Justice Ministry and the Exchange Commission.” He would “accommodate” such requests and use his connections with his former associates who had remained in Sarajevo because he “had the good will to do this thing [the exchanges]”

During the eight months he was a “minister in the RS government,” Mandic said, his main efforts were “aimed at establishing the rule of law.”