Although he is trying to protect himself and at the same time not to harm the accused Krajisnik, witness Momcilo Mandic did let slip certain things that corroborate the very essence of the prosecution case against the former Bosnian Serb political leader 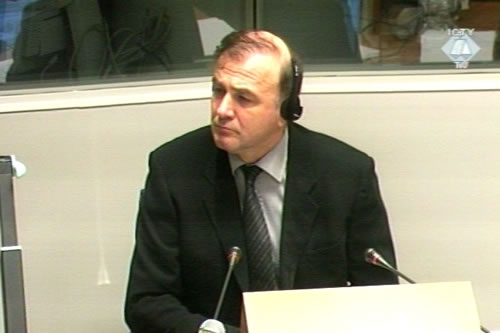 Momcilo Mandic testifying in the Krajisnik trial
As he answered the prosecutor’s questions in the past five days, Momcilo Mandic has tried to protect himself, but at the same time not to harm the accused Momcilo Krajisnik. This, however, has not been always possible. After the prosecutor played back a recording of an intercepted telephone conversation - in which Krajisnik asks Mandic to find a man by the name of Karamehmedovic in the Kula prison and to take him to Sarajevo - Mandic replied in a way that corroborated the very essence of the prosecution case against the former Bosnian Serb political leader.

“You, Mr. Prosecutor, know about superiority and subordination in the government,” Mandic said. “I am a soldier. When an order is given to me, I do not ask question. I find the man, and if the authorities in question are the military or the police, I simply say, ‘Mr. Krajisnik ordered me to take that man to Vrbanja bridge and to let him go into Sarajevo.’ They hand the person over to me, I personally take him there and report to Mr. Krajisnik that I have carried out the task.”

Today, on the fifth day of Mandic’s testimony, the prosecution tendered into evidence a report, classified as strictly confidential, by the Ministry of the Interior of the Serbian Republic of BH, dated 17 July 1992. It states that the municipal crisis staffs and war presidencies demand from the military and police to “round up and arrest as many Muslim civilians as possible,” and to hand over the detention camps to the police. The report further states that conditions in some of the camps were very bad, that there was no food and that some individuals did not comply with the international norms governing the treatment of prisoners.

Confirming the statements made in the report, Mandic added today that this was in fact the ethnic cleansing of the non-Serb population.

An additional problem, both according to the confidential MUP report and Mandic’s testimony today, was the plunder of the abandoned property in the “cleansed areas”; the military, police, paramilitary formations and civilians all took part in it.

Among the documents tendered by the prosecution today was a report by Stojan Zupljanin, ex-police chief in Banja Luka, which mentions “several thousands people of Muslim and Croat ethnic background who had been arrested” and detained in schools, factories, institutions, sports halls or in the open, in places such as football fields. After “operational processing”, i.e., interrogation, the detainees were divided into three categories. Two of these were “of interest from the security point of view”, according to Zupljanin. They were, as the report indicates, “active participants” in armed conflicts, and “persons who have participated in the financing of the procurement of weapons” or other activities aimed against the Serb authorities. The third category contained “adult males who are of no interest from the security point of view” and who may be “treated as hostages” and exchanged for people of Serb ethnic background “detained in the camps run by Muslim and Croatian forces on the basis of the same criterion.”

The prosecutor today played a recording of an intercepted telephone conversation between Momcilo Mandic and a man by the name of Grkovic in July 1992. Grkovic was the commander of the battalion in Sarajevo Nedzarici area. Grkovic is asking Mandic to let him have “about 30 Turks… or better still, 50 of them” from the prison in Kula, and says that he needs them for a “special mission.” Mandic promptly says, “Alright,” and asks how the transport will be organized. When asked by the prosecutor what kind of “special mission” it was, Mandic replied that “it was most likely the fortification of the barracks in Nedzarici and trench-digging.” He claimed that “the military had the right to take any prisoner from any prison for its purposes.”