HOW TO “CALM DOWN AND RELAX” WITNESSES FROM KOSOVO

The trial of former KLA members was adjourned after Haradin Bala was sent to hospital. Before the adjournment, the leader of the prosecution team investigating the Lapusnik case finished his testimony and the current representative of Javier Solana in Kosovo started testifying. 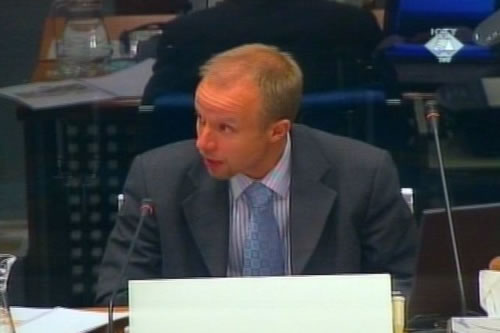 Oli Lahtinen, witness in the trial of the three former KLA members
The trial of the three KLA members was adjourned today because during the first break the accused Haradin Bala had to be taken to hospital to undergo a detailed medical examination. His defense counsel Gregor Guy Smith notified the judges that Bala “was willing to continue, but it has been decided that the doctors should have the final say.” The trial has been scheduled to continue tomorrow afternoon.

Before the adjournment, Oli Lahtinen, leader of the prosecution team investigating the Lapusnik case, finished his testimony. He was the first prosecution witness at the trial of Fatmir Limaj, Isak Musliu and Haradin Bala, accused of crimes against Serbian and Albanian civilians in the summer of 1998.

“Death to the Enemy and Traitors” is a headline published in Albanian-language Kosovo press in March 1998; it was authenticated by the witness. The prosecution also presented a number of KLA communiqués in which KLA assumes responsibility for individual killings of Albanians; the reason was their collaboration with Serbs. “Every collaborator with Serbian authorities who harms the Albanian national cause must suffer,” the KLA stated. In Communiqué no. 33, dated 20 May 1997, the KLA assumed responsibility for the killing of Hatem Dobrini; the reason was his “open and notorious collaboration with the Serbian occupation authorities.”

The accused Fatmir Limaj spoke to the British Channel 4 after the war, in August 2000, about why the KLA took up armed resistance in Kosovo. The reason was the “defeat of Ibrahim Rugova’s policy,” Limaj said in the portion of the interview that was shown in the courtroom. According to Limaj, the “pacifist, peaceful forms of protest by Kosovo Albanians” were defeated, because the Serbian state responded to them in “the worst possible way.” “The only way to resist Milosevic was with armed force,” Limaj said.

Isak Musliu’s defense counsel, Michael Topolski - the only counsel to cross-examine the witness – tried to prove that the results of the investigation that Lahtinen testified about were unreliable. He claimed that Lahtinen and his investigators “often treated [persons they interviewed] in a suggestive manner”, and that they “did not search for the truth but for proof of allegations that had already been in place.” Lahtinen denied this.

Noting the experience the Kosovo Albanians had with the Serbian police, Topolski suggested that the people in Kosovo might have been frightened when they received a visit from a person “investigating war crimes as a police officer from an international tribunal.” When asking the witness whether he had done anything to “calm down and relax” the persons he had questioned before the interview, Topolski used an example. “Did you, for instance, tell them, ‘We are not like Serbs, you can answer our questions freely.’?” “I did not use those words exactly,” the witness replied, describing how he had tried to somehow dispel the fear he had noticed in some persons.

In his re-direct examination, the prosecutor mentioned the case of a man by the name of Sadik Beqaj, who denied he had ever been detained in Lapusnik, although several detainees had confirmed the fact in their statements. He asked Lahtinen to explain. The witness replied that there could be two reasons for such behavior. Either the people were told “not to talk about that” or they concluded themselves that “it could cause then harm.” and they consequently denied having anything to do with Lapusnik, even those who had been detained there, Lahtinen concluded.

Just before the trial was adjourned, Jan Kickard, currently working as Javier Solana’s representative in Kosovo, began his testimony. He was in Kosovo several times in 1998, as a Belgrade-based Austrian diplomat.