In his cross-examination, General Ivashov was unable to present evidence to corroborate his categorical claims about the conspiracy of the US, NATO and KLA against Yugoslavia and its former president Slobodan Milosevic, or about the bias of Kosovo Verification Mission and its head Walker, who allegedly blocked the work of the Russians in the Kosovo monitoring mission in 1998 and 1999 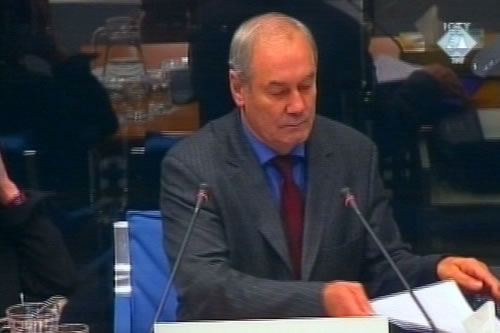 Leonid Ivasov, defense witness for Milosevic
Yet again today, Slobodan Milosevic could not understand or pretended he could not understand why a “witness of such eminence” as General Leonid Ivashov is required to corroborate his claims that as early as in 1997 there was an American plan “to destroy Yugoslavia, discredit its leadership and detach Kosovo from Serbia.”

In the cross-examination, prosecutor Geoffrey Nice asked General Ivashov to present to the Chamber “his best evidence” for his conclusions about the existence of the plan. In his answer, the witness referred to a US Army document FM33/5, which is in fact a psychological warfare field manual, which turned out to have been published in 1962. He also referred to the 1993 “US military doctrine” according to which “the entire planet was declared an area of vital American interest”; after that, in 1997, the Balkans were declared a “zone of vital US interest”; in 1998, the “tenor of the debate” changed and Yugoslavia was issued an ultimatum to either receive NATO forces in its territory or to face a military intervention. Among the “best evidence” presented by the general was a commentary by former US Secretary of State Henry Kissinger published in 1999 in the Newsweek Weekly.

When the prosecutor asked again whether this was indeed his “best evidence” for the claim about the US plans to “break up Yugoslavia”, Milosevic objected accusing Nice of “badgering the witness” and adding that “what Nice is doing is impermissible, no matter who the witness is.” Judge Robinson overruled the objection, noting that – without any documents or other corroborating evidence – the testimony of General Ivashov “has no value.”

Since Ivashov questioned the objectivity of the reports by the Kosovo Verification Mission (KVM) yesterday in examination-in-chief – and the judges deemed this to be of potentially great importance since the prosecution case is largely based on them – Nice wanted the witness to clarify why he considered the reports to be inaccurate. Ivashov replied that in those reports some actions carried out by the Yugoslav security forces were qualified as illegal, “although the KVM personnel had not analyzed Yugoslav laws and orders issued by the VJ General Staff and commands”.

When the witness confirmed that the head of the Russian contingent in the KVM sat at daily meetings with Walker and others, the prosecutor observed that the Russian would definitely have noticed and documented any instances where the mission personnel was biased and would have reported them to his superiors in Moscow. When Ivashov replied that the Russian representative in the KVM had filed a report about that to the Chief of General Staff and himself, Judge Robinson asked him if he had brought the report with him. Ivashov replied that he had not, since he had not thought he would need it. The judge insisted and asked him if he could provide this document to the court. Ivashov then said he could not, because it was an “oral report.”

Unlike the witness, the prosecutor prepared and presented a mass of documents – declarations of the Contact Group (which included Russia) and of the Yugoslav Foreign Ministry – which, to put it mildly, question the claims made by General Ivashov about a conspiracy of the USA, NATO and KLA against Yugoslavia and about the bias of the KVM.

At the end of the cross-examination, the prosecutor showed a few segments from the film The Fall of Milosevic where the witness appears accompanying the Russian Prime Minister Chernomyrdin who negotiated the terms for the cessation of NATO air strikes with Milosevic. The Finnish PM Ahtisari was also on his team. In that film, American diplomat Talbot described Ivashov as “General Nyet”, since he refused all proposals for the settlement of the crisis. Ivashov was also the general who carried out the landing of airborne Russian troops on the Pristina airport in July 1999, which almost resulted in a clash between the Russian and NATO forces.

“Yes, I am the general in question, and I was following orders issued by President Yeltsin and the defense minister,” Ivashov said today.

The trial of Slobodan Milosevic will continue on Tuesday, 30 November, with the testimony of the former Russian Prime Minister Yevgeny Primakov.