Former prime minister of the Russian Federation, Yevgeny Primakov, rejects the prosecutor’s suggestion that Russia “was in a way Milosevic’s ally”, claiming that Moscow “had its own view and interpretation of the situation in the former Yugoslavia.” He also rejected the suggestion that Moscow’s views and interpretations were for the most part based on “what the accused had told”, i.e., on wrong information 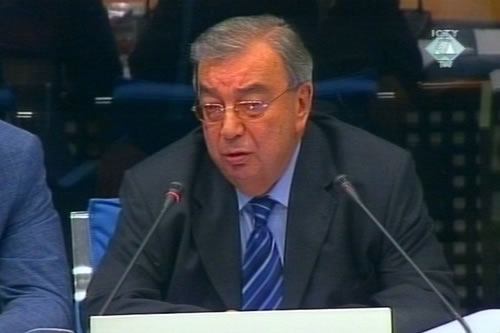 Jevgenij Primakov testifying in the Milosevic trial
In the opinion of Yevgeny Primakov, former prime minister, foreign minister and intelligence chief of the Russian Federation, between 1992 and 1995 there was “a civil war, fanned by foreign interventions” in Bosnia and Herzegovina. When he says “foreign interventions”, however, Primakov does not mean the military involvement of Serbia and Croatia in support of the Bosnian Serbs and Croats respectively, but the involvement of Western forces, with the aim of “expanding the NATO area of operation.”

As he testified today as Slobodan Milosevic’s defense witness, Primakov spoke about his numerous meetings with the accused: from the first one, in January 1993, to the last, in March 1999. According to Primakov, Milosevic advocated a political solution in BH, participated in the work of the Geneva Conference, accepted the Vance-Owen peace plan and tried to make the Bosnian Serbs do the same. When they refused to do so, he imposed an embargo on all forms of aid to Republika Srpska, except for relief supplies. Finally, Primakov added, Milosevic deserves great credit for the Dayton Accords. Former Russian prime minister says that the then US Secretary of State, Madeleine Albright, told him in a conversation that “without Milosevic no positive result would have been achieved” in Dayton.

From the civil war in BH, Milosevic and Primakov moved on to the conflict in Kosovo. In the witness’s view, the conflict was the result of an escalation of the Albanian separatism and terrorism; the Kosovo Liberation Army was responsible for it. Primakov noted that the USA was the first to put the KLA on its list of terrorist organizations, but Washington and the other Western capitals then changed course and started to see it as “a mechanism which would make it possible for the Albanian population to gain freedom and justice.” According to Primakov, Germany played an important role in effecting this change of course, because of its internal problem: a large number of immigrants it wanted to repatriate to Kosovo.

As the head of the Russian foreign intelligence service, Primakov had contacts with his US colleagues from the CIA in the early nineties. At the beginning, Primakov claims, “our two services had the same views of the situation in Yugoslavia,” but that changed in early 1993, following the inauguration of the Clinton administration. This is when, he said, “the stubborn American insistence on weakening Serbia or preventing it from getting stronger” began.

In the examination-in-chief, Primakov said that at a meeting in Belgrade in January 1993, he had asked Milosevic whether he favored the creation of Greater Serbia. As Primakov recalls, Milosevic replied that this idea could be realized only through great bloodshed, which was not something he wanted.

In the cross-examination, the prosecutor tried to refresh the witness’s memory, quoting from a book by Yevgeny Primakov in which he described the conversation in somewhat different terms. In the book, it is stated that Primakov “underlined that the plans for Greater Serbia in the current conditions cannot be realized, even with a great bloodshed, and Milosevic agreed with it.” The witness, however, failed to see any difference between the two statements and claimed that the main point was that Milosevic had agreed with it.

The prosecutor then quoted from a speech made by Milosevic at a session of the Council for the Coordination of Views on State Policy, in which the then president of Serbia notes that the goal, “the unity of the Serb people” has already been achieved de facto and all that remains is to legalize the unity and recognize it de jure, which will be done sooner or later. When asked by the prosecutor whether Milosevic had mentioned that when they had spoken about Greater Serbia, Primakov answered that he had not been present at that meeting and that the accused had never spoken to him about the de facto achieved unity of the Serb people. The then head of the Russian intelligence also claims that he did not have any intelligence on who was paying the officers in the Bosnian Serb and Krajina Serb armed forces, or on the huge quantities of weapons and materiel that the VRS had received from Serbia; General Mladic spoke about that before the RS Assembly in April 1995.

Primakov rejected the prosecutor’s suggestion that Russia “was in a way Milosevic’s ally”, claiming that Moscow “had its own view and interpretation of the situation in the former Yugoslavia.” He also rejected the suggestion that Moscow’s views and interpretations were for the most part based on “what the accused had told it”, i.e., on wrong information he was feeding it.

The previous Russian witness, General Ivashov, tried to present the activities of the Contact Group as an “informal initiative” and to play down the importance of its conclusions, claiming that these had not taken into account the views of the Russian representatives. In this regard, the prosecutor quoted a number of documents pointing to a balanced and unbiased approach adopted by its members (USA, Russia, UK, France, Germany and Italy) to the Kosovo crisis. Primakov confirmed that the documents signed by Russia “did have Russian support” at the time when they were adopted and that Russia “never accepted what it did not agree with”. The main refrain in all those conclusions – apart from the condemnation of KLA terrorist activities – was the condemnation of excessive use of force on the part of the Serbian security forces against the civilian Albanian population in Kosovo, calls to reduce the Serbian police and military presence in Kosovo, to create conditions for the return of the refugees and to give access to the international organizations, and to start a dialogue on a political settlement of the crisis which would guarantee a substantial degree of autonomy to the Kosovo Albanians.

From the joint statement of the presidents of Russia and Serbia, Yeltsin and Milosevic, after their meeting in Moscow in 1998, the prosecutor quoted the part where the Serbian side undertakes to “refrain from repressive measures against the peaceful population”, asking the witness whether “it was necessary for the accused to refrain from that.”