In his two-day testimony at the trial of Slobodan Milosevic, SANU member Mihajlo Markovic tries to set right “misconceptions” about the 1986 SANU Memorandum and the famous Gazimestan speech in July 1989, in which the then-president of Serbia announced there would be “new battles,” not ruling out that they would be “armed” ones. 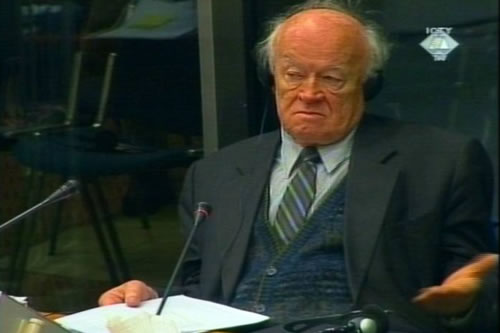 Mihajlo Markovic, defense witness for Milosevic
When he was told at the end of the two-day testimony of SANU member Mihajlo Markovic that he was entitled to re-direct questioning of his witness in order to “rehabilitate” him if he deemed it necessary, Slobodan Milosevic replied--with evident pleasure--that he did not have any additional questions. The prosecution, in Milosevic’s opinion, failed in its cross-examination today to bring into question Markovic’s testimony, meaning he did not have “to rehabilitate him in any respect.”

It is up to the judges, of course, to decide what weight to give to the testimony of an 82-year-old professor who tried for two days to set right the “misconceptions” about the 1986 Memorandum drafted by the Serbian Academy of Arts and Sciences (SANU) and which he co-authored.

Replying yesterday to questions put to him by the accused, Markovic stated that a serious economic crisis and the ever more apparent disintegration of the country were the main concerns of the Serbian Academy members which resulted in the famous Memorandum. He stuck by this view today when prosecutor Geoffrey Nice quoted to him from a book published by SANU in 1995 that the main concern of the Serbian Academy members was that the 1974 SFRY Constitution “took away the attributes of statehood [from Serbia] despite the fact that it is the largest Yugoslav republic.”

The prosecutor quoted to the witness from the Memorandum to suggest that in it, Serbia was described as a “victim of the supremacy of others” and of “revenge-seeking policy… which has reached the point of genocide.” Markovic agreed reluctantly that the words “victim” and “genocide” may be a bit too strong, but insisted that “Serbia had less rights in relation to Slovenia and Croatia,” and that a policy of systematic persecution was pursued in Kosovo against Serbs, resulting in over 200,000 Serbs leaving the province between 1968 and the early nineties. The prosecutor countered that claim with official Yugoslav statistical data indicating that about 40,000 Serbs left Kosovo in that period, noting that this figure included emigration motivated by economic reasons. “The figures are controversial,” Markovic replied, “but even 40,000 is a lot.”

While the prosecutor tried to prove that the overly strong language used in the Memorandum could have had substantial impact both on Serbs--whom Academy members were trying to convince were “victims”--and on those who allegedly “plotted against them” and prepared for “genocide,” Markovic insisted that this language “reflected the actual facts,” and that “the truth had to be told…in order to build new relations on it.”

In addition to the Memorandum, Markovic’s testimony was supposed to set things right about the famous speech Milosevic delivered at Gazimestan in July 1989; the prosecution construes the speech as a “call to arms.” Markovic claims, however, that this was a “very peaceful and tolerant speech,” adding that many Western media reached the same conclusions, including the BBC and the London-based newspaper The Independent.

Markovic stuck by his claims even after the prosecutor showed him articles published in the Ljubljana daily Delo, in the Zagreb-based Vjesnik, and Belgrade’s Borba expressing fear and concern over Milosevic’s message from Gazimestan about “new battles” not ruling out “armed” ones. Markovic attributed the comments made in the Slovene and Croatian papers to the “shockingly high degree of chauvinism” in the press there, while writing off Belgrade’s Borba as “the official Communist Party mouthpiece with a small circulation.”

In the early nineties, Markovic was the vice-president of the Socialist Party of Serbia. In October 1991, the journal published by the party, Epoha, published a text accompanied by a map with the “optimal borders of the Serb lands” after the secession of Croatia. The SPS journal drew the border along the well-known Karlobag-Karlovac-Virovitica line. According to Markovic, however, “this did not mean anything,” since “various people published various views” in the journal. Greater Serbia, Markovic is adamant, has never been an official policy of the SPS or the Serbian Government; this idea was advocated by “individuals and groups of individuals,” including Seselj’s Serb Radical Party (SRS) which, he said, “believes in the idea of uniting all Serb lands.”

In answer to a question about the forced relocation of Croats from Vojvodina, Markovic claimed that what happened in Hrtkovci was an “exchange of houses” between individual Serbs and Croats. He did accept that the “exchanges” occurred after threats made by Vojislav Seselj, whose party he described as “an insignificant opposition group.” He denied that he had any links with the party, although he did remember later that he had spoken at a “scholarly gathering organized by the SRS.”

After the testimony of Academy member Markovic, the trial of Slobodan Milosevic was adjourned until Monday afternoon.