Prosecutor Geoffrey Nice and Milosevic’s defense witness Vukasin Jokanovic failed to agree on any of the issues raised during the cross-examination. At times it seemed, indeed, that the witness failed to agree with his own statements made in 1982 and 1986 the prosecutor presented him with 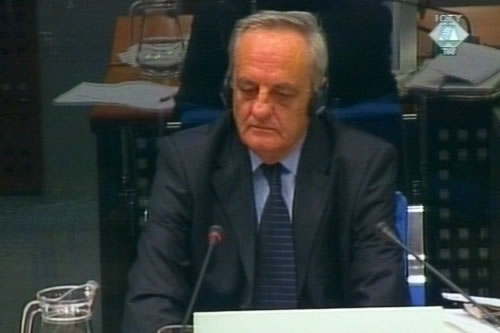 Vukasin Jokanovic, defense witness for Milosevic
In the cross-examination of Vukasin Jokanovic, who was the speaker of the Kosovo Assembly in 1989, the prosecutor claimed that thanks to constitutional amendments made in March that year Serbia had become “more equal than the other republics in the former Yugoslavia”, since it got three votes in the then state Presidency, while all the other republics had only one.

Jokanovic strenuously denied this, claiming that the representatives of Kosovo and Vojvodina provinces in the Federal Presidency had voted in accordance with the decisions made by their assemblies, not on the orders of the then president of Serbia, Slobodan Milosevic. According to the prosecutor, Serbia became “even more equal” after the changes had been forced through in Montenegro, whereby it had secured the fourth vote in the state Presidency – the same number as all the other remaining states combined. Jokanovic denied this too, claiming that those were the votes of Vojvodina, Kosovo and Montenegro, while Serbia had only one vote, as did all the others.

Jokanovic also refuted the prosecutor’s version of circumstances under which the Kosovo Assembly had given its approval in March 1989 for the amendments of the Serbian Constitution, just as he refuted the claim that these amendments curtailed the powers of the executive and the legislature in the autonomous province. While, according to the prosecutor, the session was held under a kind of siege, with tanks and armored vehicles around the Assembly and state security service agents in the corridors, Jokanovic says it was done “in a solemn and democratic atmosphere”, in which even those who did not agree with the amendments to the Constitution (only ten of them) were able to express their views.

Jokanovic claims that he does not know that the validity of the vote was challenged before the Constitutional Court of Kosovo and that a draft decision by that Court, with reference number 54/90, quashed the decision of the Kosovo Assembly dated 23 March 1989. The court findings were never signed, however, since both the Assembly and the Constitutional Court of Kosovo were dissolved in 1990.

The prosecutor and Slobodan Milosevic’s defense witness failed to agree on other issues raised in cross-examination. At times it looked as if Jokanovic did not agree with his own statements made in 1982 and 1986. The prosecutor read out the statements, quoting from reports published in the New York Times and Washington Post.

One of those reports states that the Serb officials in Kosovo were ready to admit, off the record, that the escalation of the Albanian nationalism was “the result of the past mistakes: neglect and discrimination.” Jokanovic, the only Serb official whose words are quoted in the report, claims that the sentence refers to “the mistakes made by the Albanians in relation to Serbs.” In both reports that were quoted Jokanovic mentions different – economic, social and political – reasons for the emigration of Serbs from Kosovo; nowhere does he mention the frequent killings that, according to his testimony at Milosevic trial, were the main reason why the Serbs were leaving Kosovo.

Although some twenty years have passed, Jokanovic claims he is sure that he did speak to the American reporters about the killing of Serbs, but that they failed to include it in their reports, perhaps because of the editorial policy of their papers.