Testimony of Nikolai Ryzhkov, a senator in the Russian Duma, at the trial of Slobodan Milosevic. On the basis of information “from the highest authorities in the Russian Federation” the Duma assessed events in Kosovo and the Balkans in 1998 and 1999. Parallels between “Albanian and Chechen terrorism”. Were there 800,000 mercenaries in Kosovo? 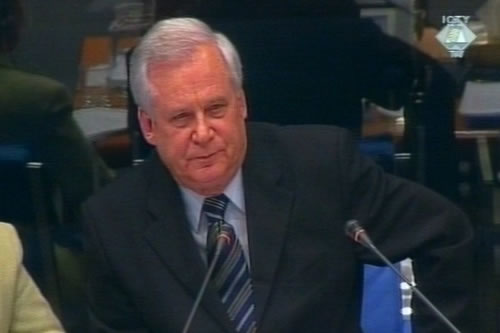 Nikolaj Ryzhkov, defense witness for Milosevic
Through the testimony of the last Soviet prime minister, Nikolai Ryzhkov, who was an MP in the Russian State Duma at the time of the conflict in Kosovo and is currently a senator there, Slobodan Milosevic is trying to prove that as early as in the fall of 1998, the authorities of the Russian Federation “had information that NATO was preparing an aggression against FR Yugoslavia.” This would, in Milosevic’s opinion, corroborate his argument that the NATO intervention in March 1999 was not caused by what is described in the indictment as a campaign of terror and violence against the Kosovo Albanians, but was designed, planned and prepared in the Western capitals, primarily in Washington.

As he announced the witness, Milosevic said that Senator Ryzhkov’s testimony would be based both on his “personal knowledge” and on the information “from the highest state authorities of the Russian Federation, Defense Ministry and Foreign Ministry,” which should, in the opinion of the accused, give greater weight to his testimony.

Ryzhkov, who was addressing Milosevic as “Mr. President”, read out extracts from several resolutions passed by the Russian State Duma in 1998 and 1999, criticizing the intentions “to settle the Kosovo crisis with projectiles and bombs” and condemning the use of force by NATO as “an act of aggression against a sovereign state”, declaring it to be “genocide”. Commenting on the statements made by some Duma members and shown to him by the accused, Ryzhkov drew a parallel between “Albanian and Chechen terrorism”. In his opinion, “terrorism has in many aspects become an instrument of geopolitical missions.”

When Judge Robinson noted that “opinions proffered by the Russian, American, English or any other parliament about the NATO intervention in Kosovo were not of great help for the Chamber”, Milosevic repeated that those were not “opinions of MPs, but assessments based on the information provided by the highest ranking state authorities.”

According to “the data at their disposal”, but without stating their source, Ryzhkov said that “the Albanian separatists were trained in camps in Albania and elsewhere”, financed partly “from Europe and Middle East, and partly from drug smuggling” as “80 percent of the drugs from Afghanistan “ passed through their hands”. He also said there were “800,000 mercenaries” in their ranks. Thinking he had not heard him right, Judge Robinson asked the witness whether he had really said, “800,000 mercenaries” and Ryzhkov confirmed, adding, “Yes, we had such information.”

At the end of the examination-in-chief, Milosevic asked the witness whether he had heard from anyone that his goal was to “create a greater Serbia”, as the Tribunal prosecution is alleging. The Russian senator replied that he had never heard from Milosevic or any other person he had spoken with in Serbia anything about Greater Serbia, but that he had heard about the idea of “Greater Albania” which was in existence from the 19th century and was promoted by Adolf Hitler, among others.

Nikolai Ryzhkov’s testimony will continue with his cross-examination by the prosecutor.