WHAT DO CAMP INMATES THINK ABOUT?

The witness claims that in the summer of 1992 through an opening in his cell door he saw Momcilo Krajisnik in the Ilidza police station, but he does not know why he was there. The judges have temporarily excluded that part of his testimony from the evidence, allowing the prosecution to seek its admission at a later stage in the proceedings 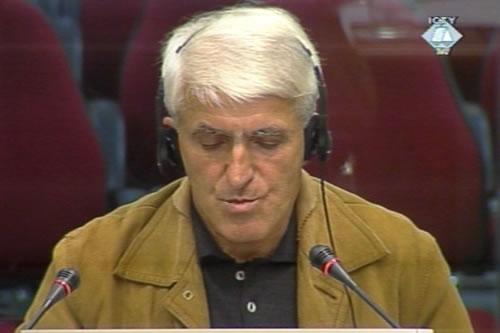 Mehmed Music, witness in the Krajisnik case
Witness Mehmed Music claimed today that he had seen the accused Momcilo Krajisnik in the summer of 1992 in the Ilidza police station, where Bosniaks were detained at the time. He further stated that he could see Momcilo Mandic, the then minister of the interior of the Serb Republic of BH, in the prison in Kula. When asked by the judges whether he knew why they visited those locations, Music stated today that “a camp inmate thinks only of food and water: even if he is beaten, the only thing that matters is to have food and water.” The rest was of no interest to him.

According to the prosecution, the fact that two high-ranking officials of the Bosnian Serb administration were seen in detention facilities, may, when taken with the other evidence, prove that the accused had known of their existence and that he had had influence over the highest-ranking police officials. To corroborate this claim, the prosecution played back recordings of two intercepted telephone conversations in which Momcilo Krajisnik and Radovan Karadzic spoke with Momcilo Mandic about detention facilities and prisoner exchanges. In the conversation of 1 July 1992, Mandic complained to Karadzic: “There are 300 men from Hadzici, nobody asks about them and nobody wants them”. He did not know what to do with them.

Witness Mehmed Music, from the village of Musici in the Hadzici municipality near Sarajevo, was one of the detainees no one was interested in; he consequently spent six months in various detention facilities - from May until November 1992. His suffering began in May 1992, when Serb forces entered the village of Musici after three days of shelling, captured 14 men and took them to Hadzici, where they were detained first in the elementary school and then in the garage of the Municipal Assembly. In the months that followed, Music was detained in the barracks in Lukavica, police station in Ilidza, prison in Kula and other detention facilities. The treatment was more or less the same everywhere: interrogations, beatings, humiliation… perpetrated by the military and the police, Arkan’s men, the Red Berets and “weekend Chetniks” who would come from Serbia and Montenegro from time to time. Last december, Music testified about his experience in the camps and prisons at the trial of Slobodan Milosevic.

Krajisnik’s defense objected because they had been notified only yesterday that the witness would be testifying about the visit of the accused to the Ilidza police station, noting that they would not be able to cross-examine the witness on this topic, since they had not been able to consult with the accused over the weekend.

The Chamber, however, decided that Music’s testimony about Krajisnik’s and Mandic’s visits was in itself “of relatively low evidentiary value” and excluded that part of his testimony from the evidence. The prosecution is allowed to seek admission of that part of Music’s testimony into evidence at a later date, depending on the other evidence it will adduce. In that case, the defense would be given an opportunity to cross-examine the witness about whom he saw in the Ilidza police station and the prison in Kula at a later date.