THE MASSACRE ON THE BUS ACCORDING TO PALE

Did the Ahatovici Territorial Defense attack forces outnumbering them ten to one in the Rajlovac barracks? Did Muslims attack a bus with Muslim detainees, mistakenly believing them to be Serbs? 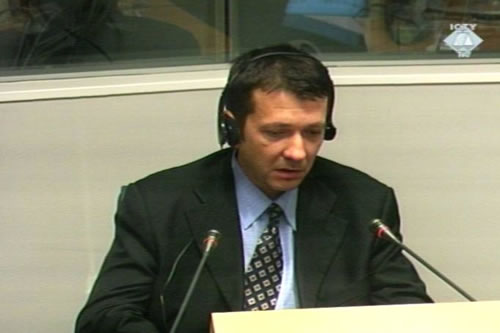 Elvir Jahic, witness in the Krajisnik case
Intercepted telephone conversations played today by the prosecution at Momcilo Krajisnik’s trial offer a different version of events in Ahatovici than the one presented by prosecution witness Elvir Jahic.

Jahic testified that on 29 May 1992, Serb soldiers and paramilitaries attacked the Muslim suburb of Ahatovici, capturing it in early June and taking about a hundred members of the local Territorial Defense prisoner. They were subsequently detained in a hangar at the Rajlovac Barracks. On 14 June, a group of 56 detainees was taken to the village of Sokolna by bus. There, they were massacred with hand-held launchers, hand grenades and fire from automatic rifles.

In three telephone conversations between 30 May and 15 June 1992, the Bosnian Serb leaders at the time were presented with different versions of that event. In the first conversation, dated 30 May, a man named Cedo notified Radovan Karadzic that Muslims from Ahatovici "attacked the Rajlovac barracks, but were repelled."

When asked by the prosecutor whether there was an attack launched that day from Ahatovici, Elvir Jahic said "absolutely not," adding that the local Territorial Defense had 100-120 poorly-armed men. It would have made no sense to attack barracks with several thousand soldiers, tanks and other heavy weapons with a force like that.

In the second telephone conversation, on 8 June 1992, the accused Momcilo Krajisnik asked his interlocutors about the "problems they are having with detainees." He then goes on to say that "nothing that would not be in character for the Serb people must be done, but of course, the Serb people should not be at risk." As an example of actions posing a risk to the Serb people, Krajisnik mentions that "some people were released here and now they have come back and are on the attack." The prosecutor linked this with the Bosniak prisoners from Bratunac who were taken to Pale and exchanged there, only to join the Territorial Defense in Ahatovici.

Finally, the third conversation heard in the courtroom today is dated 15 June 1992. Mirko Krajisnik tells his brother Momcilo that they received news the previous day that "Muslims had killed a bus-load of Serbs"; it turned out later that the victims were not Serbs but Muslims. According to Mirko Krajisnik, the bus "was attacked by Muslims who believed that there were Serbs on board; they killed everyone in it."

Asked by the prosecutor to comment, Jahic said this was "absolutely untrue" and that "the crime was committed by Chetniks who had brought them there from Rajlovac.” He noted that this was their "methodology," and that “throughout the war, there were stories that Muslims were in fact killing their own--at Markale, at the City Hall and in other places…."

During cross-examination, Momcilo Krajisnik's defense mostly focused on certain inconsistencies in the six statements given by Jahic over the past 10 years to OTP and BH investigators, skirting the issue of the massacre on the bus, both in the witness's version and the one provided by Pale.