How the suburb of Zabrdje, where Momcilo Krajisnik’s house was located, “seceded” from the Sarajevo municipality of Novi Grad and joined the “Serb Municipality of Rajlovac” 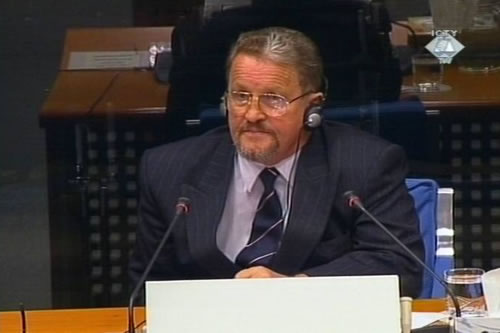 Ismet Cengic, witness in the Krajisnik trial
Momcilo Krajisnik began the joint criminal enterprise in which 37 municipalities in Bosnia and Herzegovina were allegedly ethnically cleansed at his doorstep--literally. This is what one can conclude from the testimony of Ismet Cengic, former president of the Assembly of the municipality of Novi Grad in Sarajevo.

Before the war, Momcilo Krajisnik’s house was in that municipality in the suburb of Zabrdje. Cengic testified that local SDS (Serb Democratic Party) officials launched an initiative in July 1991 for the “secession” of Zabrdje from the Rajlovac local commune; in February 1992, the “Serb Municipality of Rajlovac” was established to crown their efforts. In the beginning, Cengic tried to inform the then-speaker of the BH Assembly about the problem, but he got the impression that Krajisnik was not really interested in it and that he was “preoccupied with his own problems.” Krajisnik asked the president of the Novi Grad municipality to send him “someone from the zoning department to help [him] legalize his house.” This should mean that his house did not have the requisite building permits.

But Cengic’s impression of Krajisnik’s lack of interest was wrong. The prosecution played back two recordings of intercepted telephone conversations between Momcilo Krajisnik and Radovan Karadzic--and another between Karadzic and a man by the name of Ljubo Grkovic--which show that Krajisnik was very much interested and involved in the “secession” of Zabrdje and the establishment of the “Serb Municipality of Rajlovac.” The prosecutor also showed the relevant documents originating from the SDS Municipal Board, created on the dates when Krajisnik was busy resolving problems in the Novi Grad Municipality.

According to Cengic, Krajisnik did “put his house in order first” once again. After the Dayton Agreement, when the “Serb Municipality of Rajlovac” was reintegrated into the BH Federation, Momcilo Krajisnik, Cengic claims, “ordered the Serbs to move and to take as much as they could with them, burning all they had to leave behind.” Cengic claims to have heard that from Serbs in Rajlovac. He spoke with them at the initiative of residents who wanted to remain there; SRNA news agency and other media in Republika Srpska reported similar views.

During cross-examination, defense counsel Nicholas Stewart showed the witness a clipping from the Glas srpski newspaper, which published in early 1996 Krajisnik’s appeal to the Serbs in Serb Sarajevo not to leave their homes and to those who had already left to return “so that we can build our Sarajevo together.”

“Only Serb Sarajevo is mentioned here, not Rajlovac and the part of the city that was given to the Federation,” Ismet Cengic replied.