THE DISPATCH THAT STARTED THE WAR IN BH

Insider from the Bosnian Serb war administration, Momcilo Mandic, testifying at the Momcilo Krajisnik trial, confirmed that in March 1992 he had signed a dispatch containing orders for the division of BH police forces along ethnic lines 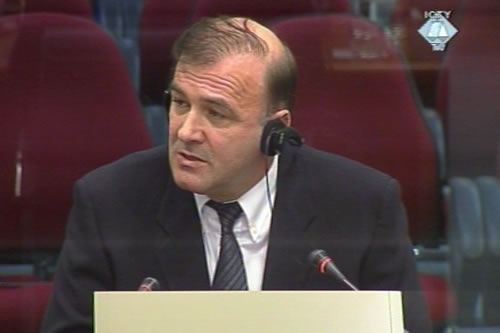 Momcilo Mandic, witness in the Krajisnik case
The war in BH began in the spring of 1992 with the division of the Republic’s MUP (police) along ethnic lines, Prosecutor Alan Tieger presented this argument to witness Momcilo Mandic today. Mandic is givin testimony at the trial of the former Bosnian Serb leader Momcilo Krajisnik, charged with genocide and other war crimes.

Mandic, who was an assistant to the BH minister of the interior and at the same time the deputy minister of the interior of the Serbian Republic of BH, issued a directive to Security Services Centers in all major cities to the effect that “it is necessary that the joint MUP be divided” and “for a Serb MUP to be created in all the territories where Serbs were in the majority.” The message caused a great deal of uproar in the public and among the MUP personnel. His superior Alija Delimustafic, minister in the BH government, took it particularly badly.

“I was only relaying the orders from my superiors, based on the conclusions of the Assembly of the Serbian people in BH reached in 1992 on the need to divide the joint MUP,” Mandic explained. His superiors in this case were the minister of the interior of the Pale administration, Mico Stanisic and the Assembly of the Serbian Republic of BH, with Momcilo Krajisnik as its speaker.

Mandic did not deny his role as the “double second in command” in the Bosnian police – both as an assistant in Sarajevo and the deputy in Pale. When asked by the prosecutor whether he was aware at the time that the directive he had dispatched might lead to inter-ethnic conflict, Mandic replied that “he did not think about it.” He rejected the prosecutor’s argument that his directive, that is, the division of the joint MUP actually started the war in BH. “There were clashes before the dispatch,” Mandic said, mentioning incidents in Bijeljina.

When he was confronted with extracts from an interview in which he stated that he had “started the war in BH together with Stanisic”, Mandic explained that this was a “free interpretation on the part of the journalist” and that he did not remember “what exactly he had said ten years ago.” The fact that his testimony did not tally on several occasions with his public statements shown to him by the prosecutor Mandic explained by saying that he “bragged and made exaggerated statements in an attempt “to increase his own importance” in relation to Biljana Plavsic with whom he was in conflict.

Mandic repeated that in 1992, Radovan Karadzic and Momcilo Krajisnik were the most influential figures in RS; there he added Professor Djeric, the police minister Stanisic and all the deputies in the RS Assembly.

Mandic has come to The Hague to testify after he hed been given the safe passage, i.e., the guarantees of the Tribunal that he will be returned to Belgrade after his testimony, and that he would not be extradited to the Sarajevo authorities who want him for alleged financial fraud.