MILOSEVIC A VICTIM OF DEMONIZATION?

The “bad image” of the SANU Memorandum and “misinterpretation” of Milosevic’s speech at Gazimestan in July 1989 were, according to SANU member Mihajlo Markovic, the result of the “demonisation” of Serbia and its former president. 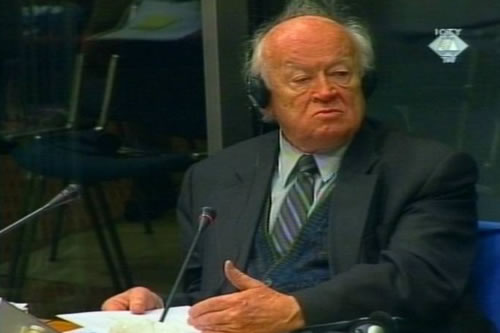 Mihajlo Markovic, defense witness for Milosevic
The famous Memorandum of the Serbian Academy of Arts and Sciences (SANU) published in the summer of 1986 was not a “Serbian national program,” but was a response to Albanian, Croatian and Slovene separatism and the crisis in Yugoslavia.

This explanation was provided today by SANU member Mihajlo Markovic, one of the authors of the SANU memorandum, in response to Milosevic’s questions. Markovic is the sixth defense witness called by Milosevic and the first one to be examined in chief by the accused himself following the Appeals Chamber’s restoration of his right to defend himself. English lawyers Steven Kay and Gillian Higgins are still in the courtroom: they will remain assigned counsel until the Trial Chamber rules on their request to withdraw.

According to Markovic, the authors of the Memorandum advocated “democratic federalism and equality among nations” and were against “national egotism, ethnocentrism and unlimited powers of the oligarchies in the republics.” When the accused noted that prosecutors presented the Memorandum as the “platform for ethnic cleansing,” Markovic responded that it “made no sense.” He added that in his opinion, the prosecution, when drafting the indictment, “lacked a motive” to charge Milosevic with genocide and ethnic cleansing, and “they figured they would find it in the Memorandum.”

Markovic claims that Milosevic “has nothing to do with the Memorandum”; at the time it was drafted, “he was not a well-known person.” He even “established a commission to investigate the matter… although he himself never expressed any views on that,” in his capacity at the time as Communist Party head in Belgrade.

“The bad image” of the Memorandum, in Markovic’s opinion, is the result not only of its being discussed and condemned by those who never read it, but of the “bad intentions” or the “demonisation of Serbia” which was “systematic, especially in the German media.”

After they reached an agreement about the Memorandum, the accused and the defense witness then embarked upon an analysis of the famous speech Milosevic made at Gazimestan in July 1989. According to Markovic, this was “a very peaceful, tolerant speech, which was a disappointment to those who expected Milosevic to launch an attack on Albanian separatism; he chose to speak about accord instead.” Markovic claims that the very same people who praised him in 1989 described and condemned the speech 10 years later as a “fierce, passionate, hysterical war-mongering speech.”

Markovic’s explanation for this is, again, the “demonisation of Serbia,” which was described at the time as “recalcitrant” and the “last bastion of communism.”

Milosevic quoted to the witness the famous sentence about the battles Serbia faced at the time, “not armed battles … although those battles cannot be ruled out either,” claiming that what he had in mind was primarily a “battle for prosperity,” and that the prosecution manipulated it in order to prove its argument about a “war-mongering speech.”

Markovic, however, did not address the issue of the “battle for prosperity,” noting that every country has the right to defend itself and to “respond to force by force.”