During his three days of testimony at the trial of Momcilo Krajisnik, the wartime mayor of Banja Luka, Predrag Radic, has quite a few problems reconciling what he meant when he said the "responsibility of the Pale authorities" to OTP investigators with what he meant during his testimony as a defense witness in the Radoslav Brdjanin case. 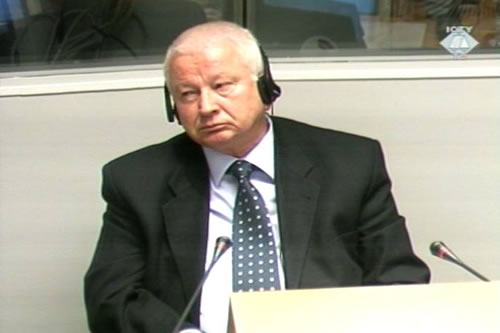 Predrag Radic, witness in the Krajisnik case
“To the right for fifteen minutes, then fifteen minutes to the left." That is how Presiding Judge Alphons Orie today described the testimony of Predrag Radic at the trial of former Bosnian Serb political leader Momcilo Krajisnik. At one point, the judge even warned Radic—the wartime mayor of Banja Luka--that he could be charged with false testimony and punished for contempt of court, although he ultimately accepted the witness’ explanation that it was all a "misunderstanding."

Radic came to The Hague as a unwilling prosecution witness following a subpoena from the Trial Chamber. During the prosecutor’s examination-in-chief and the cross-examination by Krajisnik's defense, he mostly spent his time interpreting his previous statements given to OTP investigators as a suspect and during his testimony last November as a defense witness in the Radoslav Brdjanin case.

While the prosecutor wanted Radic to confirm his previous statements—in which he defended first himself and then Brdjanin by shifting the blame for the events the Tribunal is dealing with to the "top at Pale"--the defense, of course, wanted him to say that the accused Krajisnik was not among those the witness considers as "responsible"--i.e., the "Pale top."

Radic testified for three days in the way described by Judge Orie, satisfying both sides, although one gets the impression the defense would have liked the witness to support some of its arguments more clearly and with less contradictory statements.

In one of his previous statements, Radic said that at a meeting with Radovan Karadzic and Momcilo Krajisnik, he was criticized because "too many Croats and Muslims had remained" in Banja Luka. In response to the prosecutor’s questions, he specified that Karadzic, not Krajisnik, made the remark. He confirmed that during cross-examination, but the defense counsel wanted more, trying to get the witness to confirm that Krajisnik wasn’t present at all during the conversation. Radic answered that Krajisnik "may have" attended, but that Karadzic "made the criticism for sure." Judge Orie intervened by asking whether that meant the statement he made yesterday about his meeting with Karadzic and Krajisnik "had not been accurate."

“Krajisnik was present, but did not participate in the conversation," Radic replied.

The judge then put a stop to that line of questioning, noting that "contradictions remained" but any further testimony going "to the right for fifteen minutes and then fifteen minutes to the left" would not lead anywhere.