WHAT ROLE SHOULD MILOSEVIC'S DEFENCE COUNSEL HAVE?

The Trial Chamber should assign counsel to actively represent Milosevic, or to be ready – if the accused should appoint his own counsel – to take over the defense, states the prosecution in its motion submitted at the request of the Chamber 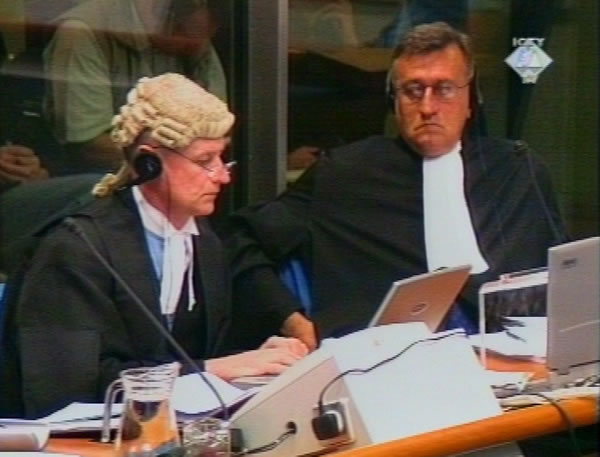 Branislav Tapušković i Steven Kay, amicus curiae at the Slobodan Milosevic trial
If Slobodan Milosevic continues to refuse to appoint his defense counsel, the Tribunal should assign him a counsel who should be ready to take over the entirety of the defense, in the view of the prosecution.

The prosecutors are of the opinion that in view of the health problems of the accused, Milosevic definitely needs the assistance of legal counsel. The accused is entitled to select one, but if he refuses to do so, in the view of the prosecution, one of the amici curiae should be appointed his defense counsel. Thanks to their involvement in the trial so far, the amici curiae are fully acquainted with the evidence and with Milosevic's line of defense and would be ready to start with their case without delay.

Prosecutors Carla del Ponte and Geoffrey Nice presented these views in a written submission, at the request of the Trial Chamber. The Chamber had invited them to present their views about the role and powers that a court appointed defense counsel should have, in light of the fact that Milosevic might not want to give him instructions or to cooperate with him.

Such defense counsel should have full control over the case, in order to avoid the danger of him having to withdraw… if his relationship with the accused deteriorates, as that would greatly delay the proceedings, the prosecution contends. "This proposal might seem Draconian, but it is not so… [because] the courts cannot allow themselves to be manipulated by the accused with no interest in the completion of the case against them in a regular manner."

The prosecution does not ask that Milosevic be denied his right to defend himself, but deems that he cannot deal with all the aspects of the preparation and presentation of his defense on his own, primarily on proofing the witnesses, as this activity appears to be exhausting him.

Milosevic should have the right to ask a certain number of questions of each witness –regardless of whether witnesses are called by the defense appointed or the court appointed counsel, the prosecution states. Furthermore, if his case is conducted by defense counsel assigned by the court, Milosevic should be given the opportunity to reconsider his position regarding appointment of his own counsel later in the course of the trial. In the opinion of the prosecution, he should also have the right to propose or refuse witnesses called by the defense counsel assigned by the Tribunal.

According to the prosecution, the defense case should begin on 31 August – as ordered by the Chamber this month – regardless of whether the witnesses are proofed by the defense counsel appointed by Milosevic or by the Tribunal.