In his third opening statement since the beginning of his trial, Milosevic outlined in broad strokes the things he would be trying to prove in the next 150 days that have been allotted for his defense. The accused has indicated that he intends to correct "the distorted picture" of the events in the former Yugoslavia, so that it no longer stands “upside-down”. 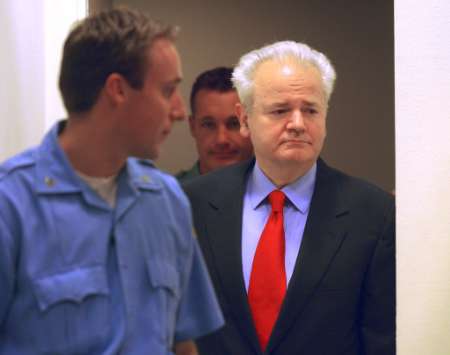 Slobodan Milosevic enters the courtroom
Noting that the world has a "distorted picture" of the events in Yugoslavia, where everything is "upside down", Slobodan Milosevic expressed his belief at the beginning of his opening statement today, that the international public would sooner or later "have to face the truth" about what had happened and who was responsible for it.

Milosevicdescribed the events in the territory of the former Yugoslavia in the period covered by the indictments as a "forcible break-up of an European, multiethnic, multicultural and multiconfessional state that based its legitimacy on history and international law."

According to Milosevic, who is charged with genocide and other war crimes, the break-up was carried out by a "synchronized action of separatist forces" in Slovenia, Croatia and BH, and "forces from abroad, primarily of the Vatican and Germany, joined by the USA and the European Community." The pattern, Milosevic added, was "very simple" and relied on "paramilitary rebel forces, arms smugglers, criminals, terrorists, and, in the case of Kosovo, on the narco-mafia."

Milosevic agrees that it was a "joint criminal enterprise", but its headquarters was not in Belgrade, he claims, but in the Vatican and in Bonn. The "allied forces of the secessionists, Germany and the Vatican, later joined by the US and the EC" participated in the enterprise.

Claiming that Germany "bore the greatest responsibility for the escalation of the Yugoslav crisis", Milosevic said that its policy was a continuation of the anti-Serb policies of the former Austro-Hungarian empire. That empire, he said, justified its opposition to the liberation and unification of South Slavic peoples by the "specter of Greater Serbia." According to Milosevic, "Greater Serbia" is a figment of Austro-Hungarian propaganda dating from the second half of the 19th Century, and this "lie", he added, "has reached monstrous proportions in this very institution", i.e., in the Tribunal.

Milosevic did not fail to challenge the legality and legitimacy of the Hague Tribunal, claiming that it was an "instrument of war, not of justice" and that it was a "NATO propaganda tool".

In the concluding part of his four-hour presentation today, Milosevic spoke in greater detail about the events in Kosovo. According to him, in Kosovo, there is a "historical continuity in the persecution of Serbs and other Christians, from the time of the Turkish occupation until the present day." Milosevic accused "KLA terrorists" of the crimes in Kosovo, claiming that they had been "armed en masse" by Germany, US and Switzerland, and received aid from Iran, Turkey and the Albanian narco-mafia. According to Milosevic, Racak was a "construed media event, the same scenario as was used in Bosnia, at Markale", in order to create a "pretext for the NATO aggression" against Serbia.

As the Chamber allowed him to go on for another hour and a half, Milosevic should continue his opening statement tomorrow to present in greater detail his version of events in Croatia and Bosnia and Herzegovina. After that, a hearing wil be held to determine whether Milosevic, in light of his frequent health problems, is able to continue to defend himself or whether he should be assigned legal counsel to assist him with the presentation of evidence.