"NO NEED" TO AMEND INDICTMENT

The Trial Chamber hearing the case of Vidoje Blagojevic, accused of crimes in Srebrenica, dismisses a prosecution motion to amend the indictment so that he is charged not with “complicity,” but with “aiding and abetting” genocide. 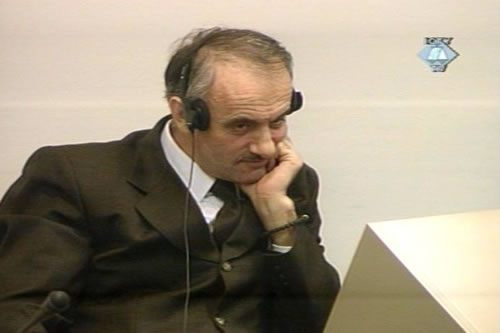 Vidoje Blagojevic in the cortroom
The Trial Chamber in the Srebrenica case dismissed the prosecution motion to amend the indictment at this late stage in the proceedings. Prosecutors wanted to charge Vidoje Blagojevic – former commander of the VRS Bratunac Brigade, accused of crimes in Srebrenica – with “aiding and abetting” genocide rather than “complicity” in genocide. The Chamber decided that, "at this stage in the proceedings, the proposed amendment is not in the interest of justice."

The prosecution sought leave to amend the indictment after the initial judgment of General Radislav Krstic – accused of the same crimes as Blagojevic – was revised on appeal. The Appeals Chamber found Krstic guilty of “aiding and abetting” genocide, rather than “complicity,” and reduced his sentence accordingly from 46 to 35 years in prison.

Prosecutors tried to bring the indictment against Blagojevic in line with this judgment. Since "complicity” is a broader term than “aiding and abetting," the amendment would in a way tone down the accusations. However, Blagojevic's defense counsel believed that the amendment would harm his client at this stage, when the defense case is near its end, since it is focused on attempts to challenge allegations of complicity, not only of aiding and abetting.

Deciding there was "no need" to amend the indictment, the Trial Chamber probably took into account that an amendment could prolong the trial, which is drawing to its close. Vidoje Blagojevic's defense case is set to finish at the end of next week. The defense of the second accused, Dragan Jokic, will begin presenting evidence at the beginning of July and is expected to rest before the Tribunal’s summer recess, which begins on 1 August.