Former military prosecutor Predrag Drinic, a defense witness, notes that in the prevailing atmosphere in Srebrenica in 1995 and 1996, it would have been "extremely risky" to launch an investigation into the Srebrenica massacre. 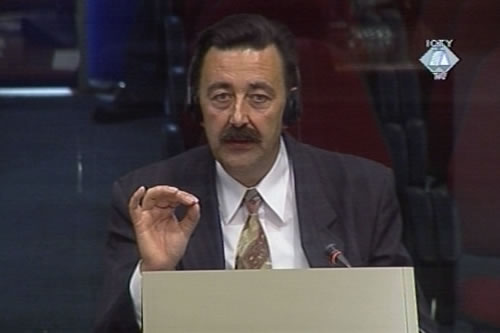 Predrag Drinic, witness at the Vidoje Blagojevic trial
No report was ever filed with the Military Prosecutor's Office in Zvornik about events after the fall of Srebrenica in July 1995. So testified Predrag Drinic today. He was a VRS military prosecutor at the time.

Appearing as a defense witness for Vidoje Blagojevic, the former VRS Bratunac brigade commander, Drinic ruled out the possibility that any investigation could have been launched or a criminal report filed against the security chief, Ljubisa Beara, and other members of the Main Staff who might have been involved in Srebrenica’s crimes.

"In principle, legally speaking, de jure, it would have been possible, but that person would have to be concerned for his life and the lives of his family, since these were serious crimes and the officers were serving in the supreme command. These men were dangerous, this was all extremely risky," Drinic said.

In cross-examination, the witness supplemented his statement by saying that any investigation or criminal prosecution of people responsible for the Srebrenica massacre was not possible. If, as he said, one has in mind the "situation, environment, mood of the people, officials, state and military, the feelings of citizens, and the overall atmosphere in 1995 and 1996, this was not ‘realistic’ in practice.”

The witness claimed, both in examination-in-chief and in cross-examination, that he did not obtain any official information about crimes in Srebrenica until the end of March 1996, when the chief of the Public Security Centre in Zvornik, Dragomir Vasic, convened a meeting at the request of Radovan Karadzic himself. Karadzic wanted to set up a commission to determine whether two bodies found in the village of Pilica were victims of a crime.

According to a report just published by the Republika Srpska Government, at least 500 Bosniak men were killed in the Culture Hall in Pilica on 16 June 1995.