KILLING WHILE ON LEAVE

Petar Salapura, former intelligence chief in the VRS Main Staff, testifies that members of the 10th Commando Detachment were officially on leave when they executed 1,200 Bosniak prisoners at the Branjevo farm in July 1995. OTP investigators interviewed Salapura in 2001 or 2002--not about events in Srebrenica in July 1995, but about Alija Izetbegovic and Naser Oric. 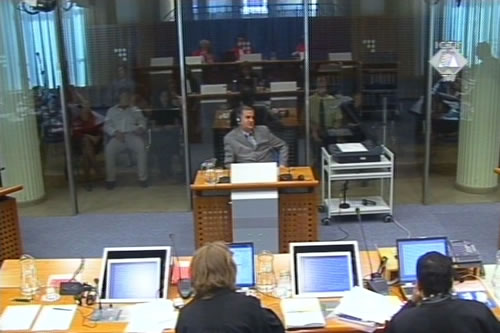 Petar Salapura, witness at the Vidoje Blagojevic trial
"Until Erdemovic surrendered himself and gave his statements, neither I nor anyone else in my department knew anything about mass killings of prisoners," said Petar Salapura, testifying at the trial of Vidoje Blagojevic, commander of the Bratunac Brigade. More than 7,000 captured Bosniaks from Srebrenica were killed in Blagojevic’s area of responsibility between 11 and 19 July 1995.

At the time, Petar Salapura was chief of the Intelligence Department at the VRS Main Staff, and Drazen Erdemovic was a soldier in the 10th Commando Detachment, directly subordinate to the VRS Chief of Staff. Erdemovic confessed before the Tribunal that he and several other members of the 10th Commando Detachment were among those who carried out the executions of about 1,200 Bosniaks at the Branjevo farm on 16 July 1995.

As this witness stated, those soldiers were supposed to be on leave. Their detachment was re-subordinated to the Drina Corps in early July, but Salapura claims they were given leave on 13 July. He does not know how they became executioners or on whose orders. When the Erdemovic trial began, he asked the former commander of the 10th Commando Detachment, Lieutenant Miso Pelemis, whether it was possible that his soldiers had taken part in that “action.”

"He told me they had," the witness stated today. Under cross-examination, he stood by his claim that at the time of the Branjevo farm massacre, the "commandoes" were on leave.

According to Erdemovic, who testified about those events at the trials of Radislav Krstic and Slobodan Milosevic, eight members of the 10th Commando Detachment were sent on a "special mission" on the morning of 16 July 1995. They went to the Branjevo farm with an unidentified VRS lieutenant-colonel and two military policemen from the Zvornik Brigade. At Branjevo, between 10 a.m. and 4 p.m. that day, they shot and executed the prisoners who were brought in on buses under military police escort.

As the intelligence chief at the VRS Main Staff in July 1995, Salapura was in a position to give proposals and suggestions for the deployment of the 10th Commando Detachment but not to issue orders. Only the VRS Chief of Staff, Ratko Mladic, and his assistant for intelligence and security, General Zdravko Tolimir, could do that. He stressed several times that he had had nothing to do with events in Potocari--the separation of men from women, capturing the Bosniaks and their execution. His job – intelligence – dealt with entirely different things.

However, he was unable to answer a question asked by both the defense and the prosecution: Why did the Zvornik Brigade duty officer note in the evening of 13 July in the duty log that "Salapura phoned for Ljubisa Beara and Drago to report to Golic"?

Ljubisa Beara was chief of security at the VRS Main Staff, Drago (Nikolic) the chief of security in the Zvornik Brigade and Pavle Golic the security officer in the Drina Corps. Beara and Nikolic are indicted for complicity in the Srebrenica genocide but remain at large.

"In the morning of 14 July, Drago Nikolic organized the execution of 5,000 or 6,000 Bosniaks detained in four schools in the Zvornik area. Beara was doing the same, first in Bratunac and then in Zvornik, and Pavle Golic was involved in the process. Does that refresh your memory?" asked prosecutor Peter McCloskey.

"No, I did not have any indications of any such activities," Petar Salapura replied.

The defense implicitly reproached the prosecution for not having tried to take a statement in the past about events after the fall of Srebrenica. When asked by Michael Karnavas, Blagojevic's defense counsel, whether any representatives of the OTP had ever contacted him, Salapura said, "Yes, but the topics were Alija Izetbegovic and Naser Oric and the conflict between Muslims and Croats."